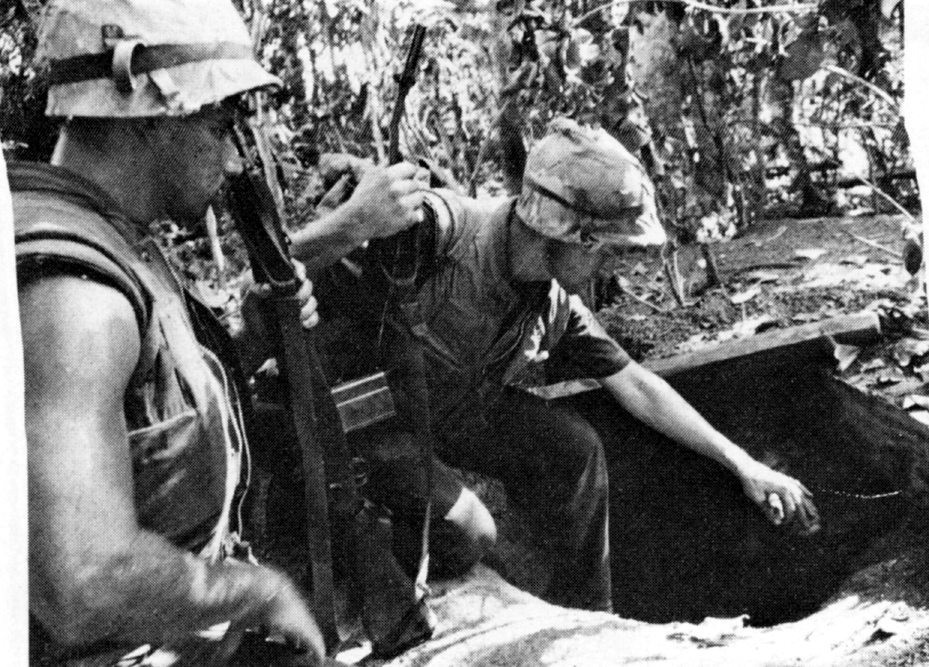 Marines uncover an enemy underground position during Operation PIRANHA. One Marine can be seen inside the tunnel searching for enemy documents and supplies.

operation, the two artillery units, the 107mm Mortar Batteries from the 3d Battalions of the llth and 12th Marines, fired only 10 missions totaling 110 rounds from positions on Batangan.* The second day they fired 111 rounds. The naval gunfire ships fired 1,052 rounds, but only two illumination missions of 127 rounds for the American forces. Marine air-naval gunfire liaison teams (ANGLICO) attached to the South Vietnamese battalions called in the remainder of the naval support.

Another reason for the limited use of supporting arms fire was the elaborate precautions the Marines took to safeguard the civilian population. The following excerpts from Lieutenant Colonel Kelly's operation order furnish some evidence of this:

. . . All naval gunfire, artillery, mortar, and close air support must be approved explicitly by this headquarters (FSCC) fire support coordination center prior to being fired. . . . Once approved, all artillery, mortar, and naval gunfire will be fired on forward observer's command. . . . Supporting fires on populated areas will be approved only when organized resistance is being encountered therefrom. Sniping does not constitute organized resistance. . . . No houses or villages will be burned or destroyed as a retaliatory measure.1

Lieutenant Colonel Kelly noted that despite the attempt of the Marines to assure the local populace that no harm would come to them, the villagers remained aloof and made no friendly overtures.2

Considering the magnitude of the allied effort, PIRANHA hardly could be called a success. The target of the operation, the 1st VC Regiment, had withdrawn from the Batangan Peninsula before the operation began. Local villagers told the Marines that Viet Cong units had been in the area but had left, some less than 24 hours before PIRANHA started. Intelligence reports later indicated that the enemy regiment began leaving the area on 4 September, coinciding with the increased movement of the amphibious ships at Chu Lai and the increased activity of the South Vietnamese naval junk force.

The Marine experience in Operation PIRANHA pointed to the need for the development of tactics to clear VC out of caves and enclosed areas. After the operation, Lieutenant Colonel Kelly recommended to General Walt that Marines be authorized to use riot-control gas to save both American and enemy lives. This suggestion touched on the very sensitive political subject of gas warfare; there was no response, for the moment. **

Much Ado About CS, Operation STOMP

The U.S. and South Vietnamese commands had suspended the use of riot-control ammunition, including tear gas, in the spring of 1965 after a public outcry in the United States against such tactics. When Secretary of Defense McNamara visited Saigon in July, he told General Westmoreland that public opinion would not support the use of gas in any form. Despite this statement, during the continuing deployment of U.S. forces to South Vietnam and the reorganization of the American Command in Vietnam, not all echelons of MACV received word of the prohibition. In u Corps, Lieutenant Colonel Leon N. Utter's 2d Battalion, 7th Marines, which on 5 August came under the operational control of Army Major General Stanley R. (Swede) Larsen's

* Two South Vietnamese artillery units, a four-gun 105mm howitzer battery, and a two-gun section of 155mm howitzers, supported their portion of the offensive.

**Lieutenant Colonel Kelly later commented: 'It was apparent from this operation that the enemy could not be talked out of the caves and therefore some techniques had to be devised that would enable the Marines to cope with him in his underground hide-out and at the same time minimize as much as possible the risks involved.' LtCol James P. Kelly, Comments on Shulimson, 'USMC Ops Jul-Dec65,' dtd 28May71 (Vietnam Comment File).