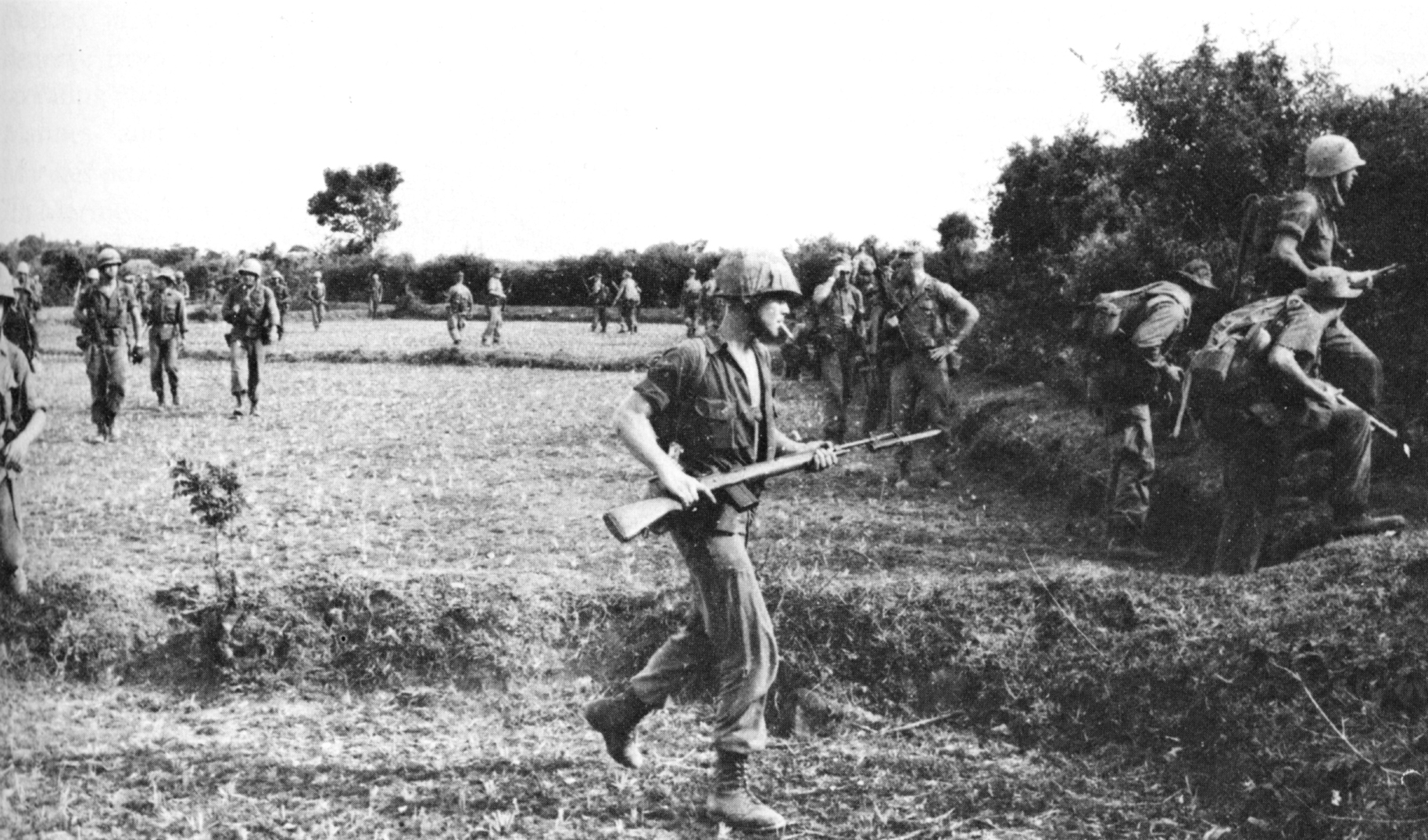 Marines from Company E, 2d Battalion, 4th Marines move out from LZ WHITE during Operation STARLITE. Shortly after this picture was taken, the company met stiff resistance from Viet Cong entrenched to the right of the photograph.

establish a blocking position there which would prevent the VC from slipping southward. Company M, 3d Battalion, 3d Marines was to hold its blocking positions further north. The enemy was to be left no avenue of escape.

On the 19th, the SLF battalion moved into its zone of action which included the area of the fiercest fighting of the day before. The VC were gone. At 0900, Companies I and M of Bodley's battalion left the regimental CP, and moved through An Cuong (2), meeting no enemy resistance. They brought out the supply convoy* and by 1500 had established their assigned blocking position at An Thoi (2).

Although much of the enemy resistance had disappeared, Fisher and Muir still found pockets of stiff opposition when they launched their combined attacks at 0730. The terrain was very difficult. The compartmented rice paddies, ringed by dikes and hedgerows, hindered control, observation, and maneuverability. The VC were holed up in bunkers, trenches, and caves which were scattered throughout the area. Marines would sweep through an area, only to have enemy snipers fire upon them from the rear. In many cases, the Marines had to dig out the enemy or blow up the tunnels. By 1030, Company E had linked up with Company K and the two battalions, continued their advance to the sea. By nightfall, the 2d Battalion had completed its sweep of the Phuoc Thuan Peninsula. Enemy organized resistance had ceased.

Although the cordon phase of STARLITE had been completed. General Walt decided to continue the operation for five more days so that the entire area could be searched systematically. He believed that some of the enemy had remained behind in underground hiding places. Fisher's and Muir's

*0f the 23 Marines assigned to the convoy, five were killed and several others wounded. Only nine men remained in action throughout the three-hour period they engaged the VC. The enemy left 60 bodies behind.