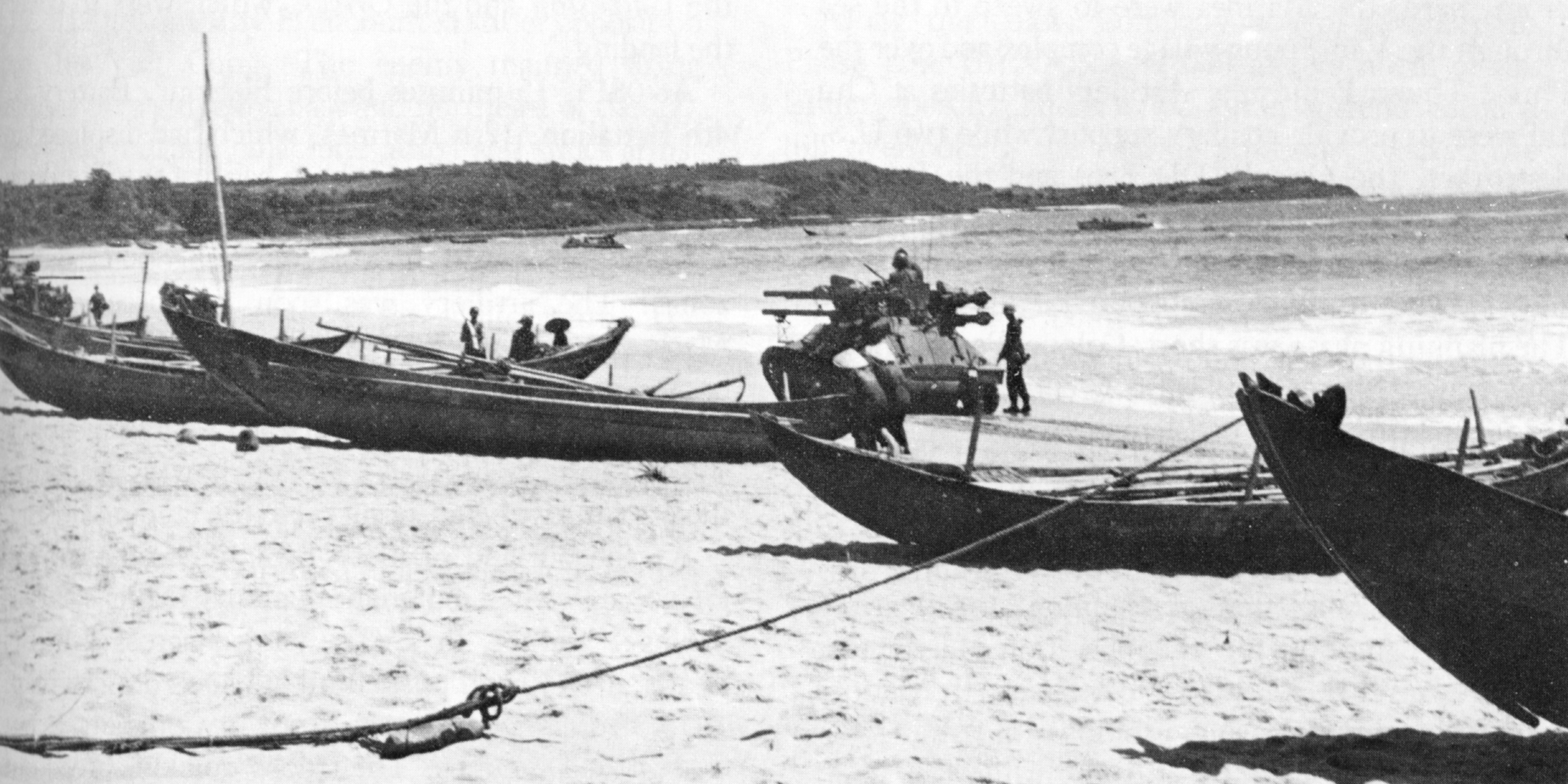 A Marine Ontos patrols a beach area during Operation STARLITE. The South Vietnamese fishermen go about their business despite the war.

dry crop areas. The Marine commanders noted two suitable amphibious landing sites, one beach between two peninsulas northeast of the Van Tuong Complex (Nho Na Bay) and another beach 4,000 meters to the south, north of the coastal hamlet of An Cuong (l).

While airborne, Colonel Peatross and his commanders selected the amphibious assault landing site, as well as the helicopter landing zones (LZs). They chose the more southerly beach, later designated GREEN Beach, for the landing. A force there would block VC avenues of escape to the south. Three LZs, RED, WHITE, and BLUE, were selected four to five miles east of Route l and roughly one mile inland from the coast. LZ BLUE, about 2,000 meters west of GREEN Beach, was the southernmost of the landing zones. WHITE was 2,000 meters west-northwest of BLUE, while RED was 2,000 meters north of WHITE. From these positions, the Marines were to move northeast to the South China Sea.

Fortunately for the 7th Marines, the ships of Amphibious Squadron (Phibron) 7, which had brought the regiment to Vietnam, were at Chu Lai unloading BLT 111 and Da Nang disembarking BLT 3/9. Colonel Peatross later wrote:

On the evening of 16 August the Amphibious Group Commander, Captain W. [William] R. McKinney, USN, under whose command most of the ships operated, had to be informed of the operation. Colonel Peatross sent his RLT S-4, Major Floyd J. Johnson, Jr., out to Captain McKinney's flagship to inform him of the operation and to brief him on the plans as we knew them. This was a timely move as one of the ships had just sailed from Chu Lai and was on its way to Hong Kong. Captain McKinney was able to turn this ship around and return it to Chu Lai just in time to make the tight schedule laid out for the earliest possible D-Day.6

On the morning of the 17th, McKinney's staff joined the Marine aviation and ground planners ashore and the plans were completed. Lieutenant Colonel Muir's 3d Battalion was to land across GREEN Beach at 0630,18 August with Companies I and K abreast, K on the right. Company L, the battalion reserve, was to follow as the lead companies swerved to the northwest. The remaining company, Company M, was to make an overland movement from Chu Lai to a ridgeline blocking position in the northern portion of the operations area, four miles northwest of the landing beach and one mile inland from the sea, closing off the VCs' retreat. Soon after H-Hour, UH-34s from Marine Medium Helicopter Squadrons 261 and 361 were to shuttle Fisher's 2d Battalion into the three LZs. The two battalions were to join forces when Company H from LZ BLUE linked up with Company I outside the hamlet of An Cuong (2), l ,800 meters inland from GREEN Beach.