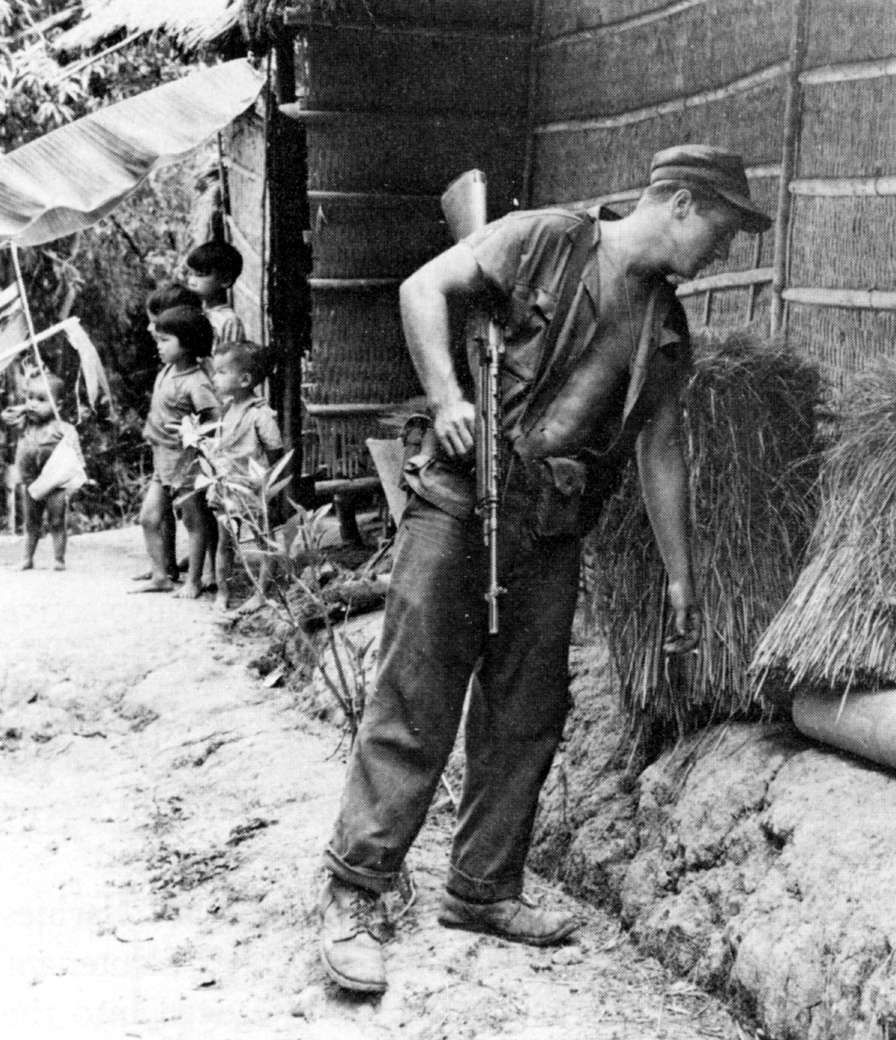 A Marine searches for caches of VC weapons in a hamlet south of Da Nang. The five small children in the background appear to be unconcerned about the presence o f the American Marines.

companies in Duong Son (l) continued to receive fire from Cam Ne (2) directly to the west and from Duong Son (2) to the south. Throughout July and into August, the Marine units encountered resistance in the area.

An incident that perhaps best mirrored the perplexities which faced the 9th Marines was a mission conducted in the Cam Ne village complex on 3 August by Company D, 1st Battalion, 9th Marines. It was planned in conjunction with a 3d Marines' operation, BLASTOUT I, carried out by the 1st Battalion, 3d Marines and an ARVN battalion four miles south of the Cam Ne complex along both banks of the Yen River. The 3d Marines battalion would provide a blocking force to the south while Company D cleared the Cam Ne complex.

Cam Ne was a well-known VC stronghold and its residents were long-time Communist sympathizers, dating back to the time of the French. American intelligence officers estimated that VC local and main force troops were present in company size in the village complex.

According to Lieutenant Colonel Ludwig, the 1st Battalion, 9th Marines commander, his orders were 'to search out the VC and to destroy them, their positions, and fortifications.' Captain Herman B. West, Jr., the Company D commander, briefed his platoons to the effect that if they received fire from a 'a position, hedgerow, trench line, bunker, spider trap, hut, or any other location,' they were 'to overcome and destroy.'34

The company was to embark in a platoon of LVTs at the northern end of the Phong Le Bridge, navigate the Cau Do to its junction with the Yen River, and land opposite the Cam Ne complex, 1,200 yards downstream. The Marines were to attack east and occupy Cam Ne (l) and Cam Ne (2), two and a half miles from the line of departure. A forward battalion command post was to be established on the northern bank of the Song Cau Do. The attack was to begin at 1000 with the Marines scheduled to reach their objectives at 1500 that afternoon.

Complications arose at the very beginning. Three of the LVTs stuck in the mud of the Cau Do. Two tractors were able to get free, but the troops in the third had to transfer to another vehicle. The entire company did not arrive at its line of departure until 1040.

The objective area consisted of a maze of open rice paddies, tree lines, hamlets, and hedgerows. When the Marines dismounted from the tractors, they were greeted by occasional small arms fire from the tree line in front of the builtup area to the southeast. The troops quickly advanced on a 1,000-foot front, all three platoons were on line. It took the company approximately 10 minutes to cross the open paddy land and reach the cover afforded by the nearest treeline. One Marine was wounded during this phase of the attack. As the Marines edged toward, the VC withdrew into the hamlets. The hedgerows around the hamlets caused other difficulties. As the LVTs bore forward and crushed the thick hedgerows they set off several boody traps. No one was injured and the Marines proceeded into the cluster of thatched huts. The VC, however, refused to fight and disengaged. These tactics added to the frustrations of the Marines who were spoiling for a fight.