began to seriously hunt and destroy the enemy before he could bring his weapons to bear on our enclaves.24

Reinforcing Colonel Hay's observation, General Krulak remembered: ''I landed at Da Nang at 0800 that day, and it was already acknowledged that we had better get moving off the airfield perimeter, or there would be more of the same kind of attack.''25

Expansion to the South

The basic weakness in the airfield defense remained that the Marine TAOR at Da Nang did not extend south or east of the airbase. General Walt later acknowledged that the enemy's sapper assault had been a 'surprise,' but that he and his staff members had been 'worried about such an attack.' Walt stated that General Thi, the I Corps commander, 'was concerned about incidents' between Marines and South Vietnamese civilians in the densely populated areas south and east of the base. The III MAF commander repeatedly had asked General Thi 'for permission to put some type of defense outside the airbase on the east and south side,' but each time the I Corps commander had answered ' 'that action be delayed until the people of Da Nang become more used to the Marine presence.'26 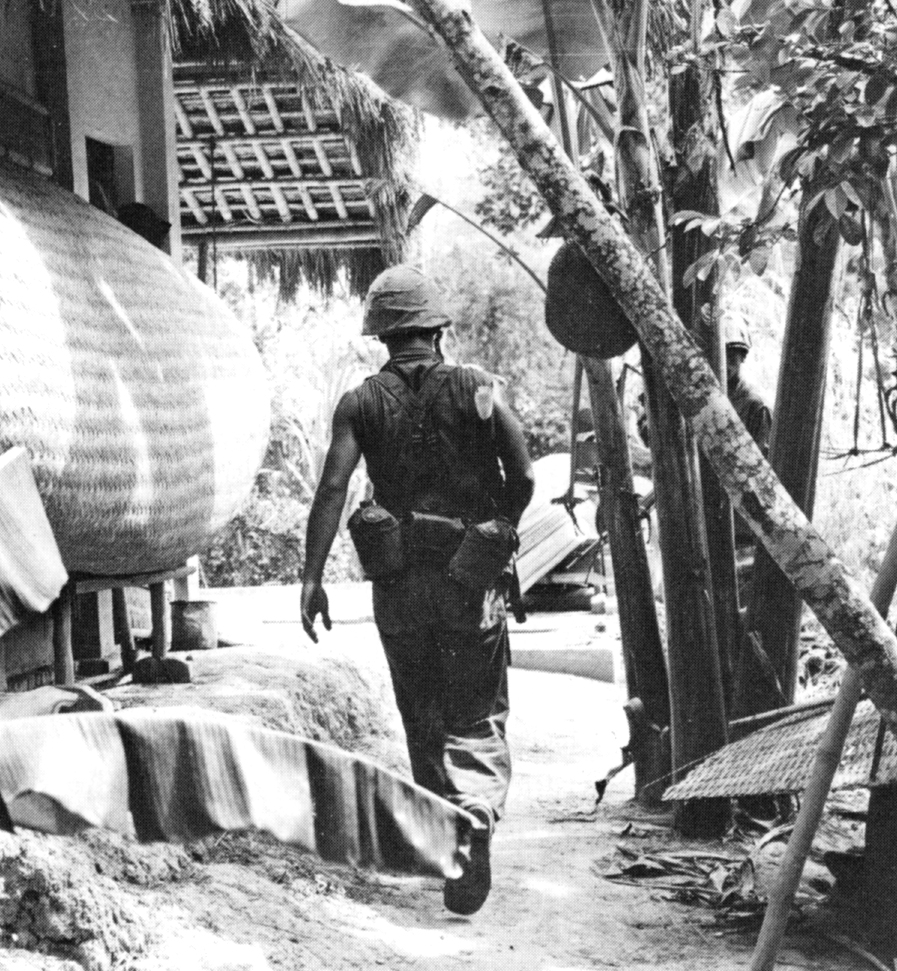 A Marine from the 2d Battalion, 9th Marines moves through a Vietnamese hamlet south of Da Nang. The Marines found war in the hamlets to be difficult and frustrating.

Despite General Thi's reluctance to have American troops operate in populated areas, General Walt, accompanied by General Krulak, met with the I Corps commander on 2 July, to renew his request to extend the Da Nang TAOR. Recognizing that the present defense arrangements gave every advantage to the enemy, General Thi gave his tentative approval for the expansion, but asked that General Walt put his request in writing. The I Corps commander still had reservations about the presence of Marines in the populated area and remarked to General Krulak, ''You are still not ready to try and search out the VC.'27

On 5 July, General Walt, in a letter to General Thi, formally asked that the Marine boundary be expanded approximately four miles south of the Cau Do and that it include as well, the Tiensha Peninsula east of the airbase. At the same time, Walt requested that the Marine reconnaissance zone be extended to Hai Van Pass, 19 miles north of Da Nang.

The Vietnamese general then directed his staff to study what effect the enlargement of the Marine TAOR would have on the following:

(1) The 'anti-Communist spirit' of the local population.
(2) Administration and territorial security.
(3) Coordination with ARVN forces in the area.
(4) The lack of experience on the part of the U.S. Marines in distinguishing the civilian population from the Viet Cong.

This last qualification apparently was uppermost in the minds of the ARVN officers. On 20 July, realizing the importance of the security of the Da Nang base and the limited capability of the South Vietnamese to provide this protection, General Thi officially approved the boundary extensions in a letter to General Walt. The Vietnamese general cautioned that the Marine occupation of the new area should be divided into several phases and urged that the Marines thoroughly coordinate their planning and operations in the area with the Vietnamese military forces.28

III MAF designated the territory between the Cau Do and the southern boundary of the base as Zone A, and the area to the south of the river as Zone B. The Marines were to occupy Zone A immediately, and, at the same time, begin combined operations with ARVN forces south of the river. As in most