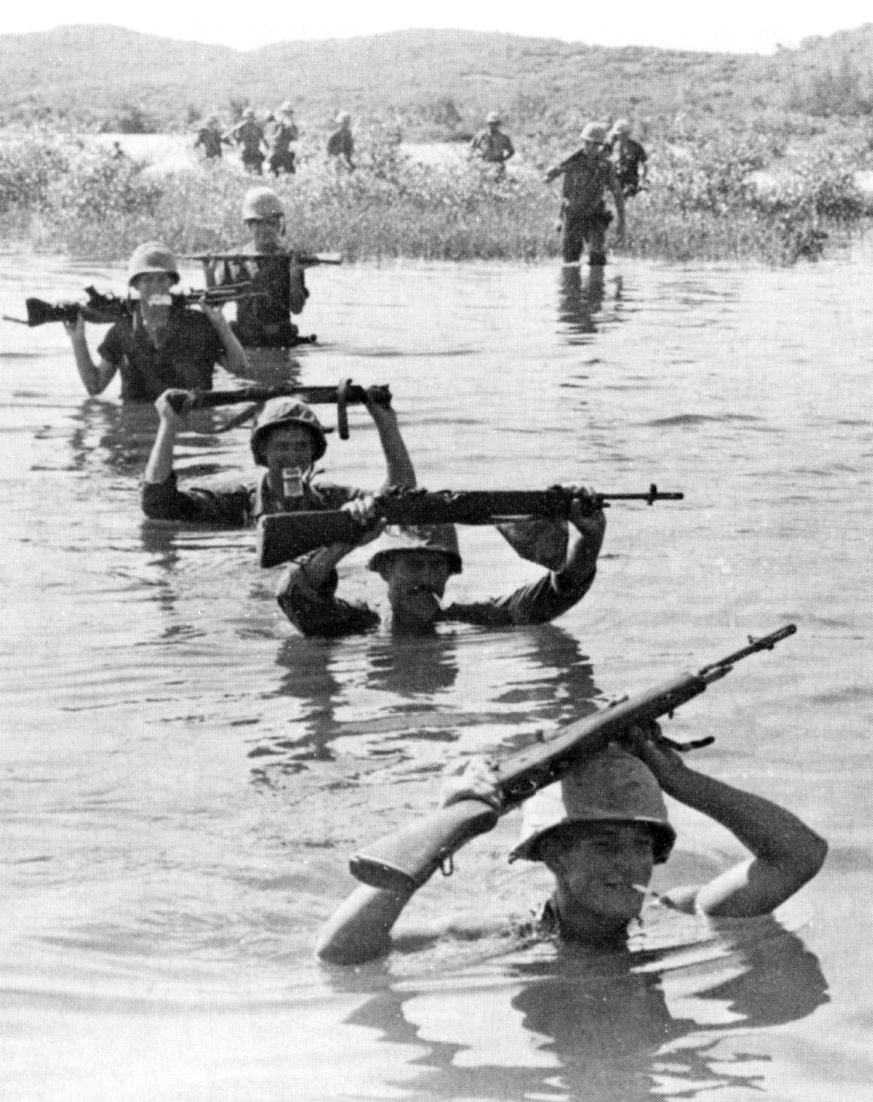 Marines from the 2d Battalion, 4th Marines cross a stream in the northern sector of the Chu Lai TAOR, The Marine in the foreground appears to be able to smile despite a cigarette in his mouth and water up to his neck.

had established their command posts in Vietnam. Elements of the 12th Marines, the division artillery regiment, were located at all three enclaves. The 1st Battalion, 12th Marines under Major Gilbert W. Ferguson supported both Da Nang and Phu Bai, while Lieutenant Colonel Arthur B. Slack, Jr.'s 3d Battalion, 12th Marines provided artillery support for the 4th Marines at Chu Lai. Other supporting units, spread throughout the three enclaves, included major elements of the 3d Motor Transport Battalion, the 3d Engineer Battalion, and the 3d Reconnaissance Battalion. The wing consisted of two aircraft gioups, MAGs-12 and -16 with five helicopter squadrons, an equal number of fixed-wing squadrons, and ancillary ground components.

Upon taking command, General Walt had toured the three base areas and familiarized himself with each. Based upon his own observations, supported by available intelligence, he concluded that the VC were building up their forces in the areas contiguous to the Marine enclaves. Walt decided that the Marines had to extend their TAORs and at the same time conduct deeper and more aggressive patrolling. Colonel Hardy Hay, the III MAF G-3, recalled that shortly after Walt's arrival:

He asked me one night, 'What is our major G-3 problem?' My answer-We have got to convince Saigon that by trying to establish a ring around Chu Lai, Da Nang, and Phu Bai-we will never have enough men and material to adequately do it.

Yet as Hay observed, the Marines were unable to undertake offensive operations because their ''hands were tied by ComUSMACV directives.''35

On 15 June a significant change in the role for the Marines took place when General Westmoreland permitted General Walt to begin search and destroy operations in the general area of his enclaves, provided that these operations contributed to the defense of the bases. The MACV commander further directed that the Marines at Chu Lai conduct operations to the west of their TAOR into the suspected Do Xa VC supply complex.

With this new authority and with the concurrence of General Thi, the I Corps commander, General Walt enlarged the TAORs at all three enclaves. The enlargements gave the units of the division more room for offensive operations and provided distinguishable lines of demarcation on the ground since the trace of the new TAORs followed natural terrain features. At Da Nang, the area occupied by the 3d Marines consisted of 172 square miles and contained a civilian population of over 50,000 persons, but the populated region directly to the south and east of the base still remained the responsibility of General Thi's forces. Within the new Chu Lai TAOR of 104 square miles, there were 11 villages, containing 68 hamlets, and a dvilian population of over 50,000. The area of responsibility for the 3d Battalion, 4th Marines at Phu Bai was much smaller, consisting of 61 square miles, but within that area civilian population numbered almost 18,000.

The Seeds of Pacification

Shortly after General Walt assumed command of ID MAF he had a survey made which revealed that over 150,000 civilians were living within 81mm mortar range of the airfield, and consequently, the 'Marines were into the pacification business.'36 In fact, General Greene later observed:

From the very first, even before the first Marine