trap. In the first lift, Ewers' wingman. First Lieutenant Wendell T. Eliason was killed in the landing zone, but his co-pilot. First Lieutenant Donald R. Wilson, managed to fly the badly damaged craft back to Da Nang. Four other helicopters in this lift also had to be returned to Da Nang for battle damage repair.

The enemy shot down one of the Marine UH-34Ds. whose pilot. First Lieutenant Dale D. Eddy, 'was wounded in the neck and initially believed KIA.' Eddy's copilot. First Lieutenant James E. Magel, also wounded, was able to make his way to another helicopter, but then died. According to Ewers, Eddy's crew chief. Sergeant Cecil A. Garner, 'himself wounded, took his M-60 machine gun with him and joined the firefight on the ground.' Another pilot from HMM-163. Major Bennie H. Mann, Jr.. landed his craft in the face of the heavy enemy fire and rescued Garner and Eddy. According to Ewers, Mann's crew chief, Staff Sergeant Stanley J. Novotny, 'somehow found the strength singlehandedly to lift the concious but paralyzed' six-foot, 200-pound Eddy out of the downed craft. Mann was awarded the Navy Cross and Novotny received the Silver Star for the rescue.8

Despite heavy enemy opposition, HMM-163 continued to make three lifts into the zone until the entire 5th Airborne Battalion had been landed. All told, 25 Marine helicopters and 10 U.S. Army helicopters took part in the operation.* Nineteen of the aircraft sustained battle damage. Two Army UH-1s, in addition to the Marine UH-34D, also were shot down. The Army craft were later recovered but Eddy's aircraft was a complete loss. The Marines suffered a total of 19 casualties including the two killed while two U.S. Army personnel required hospitalization. Colonel Thomas J. O'Connor, at the time the 1st MAW Chief of Staff, later wrote: 'It was obvious to us in Japan from battle damage and casualty reports of this mission that the VC were really moving into the Da Nang area in strength and that the situation was changing.'10

In contrast to the helicopter squadrons, the Marine infantry battalions were confined to the approximately eight square miles of relatively unpopulated terrain encompassing the airfield and the high ground to the west which made up the MEB's tactical area of responsibility (TAOR). ** Within the Marines' TAOR, Bain's 1st Battalion, 3d Marines manned defenses on the airfield while McPartlin's 3d Battalion. 9th Marines moved to forward positions on hill mass 268-327 due west of the base. There, the latter battalion not only protected the airfield but also provided security for Battery B of the LAAM Battalion which moved to Hill 327. To accomplish the mission of airfield defense, Bain's battalion established an extensive system of listening posts forward of the company defensive areas around the 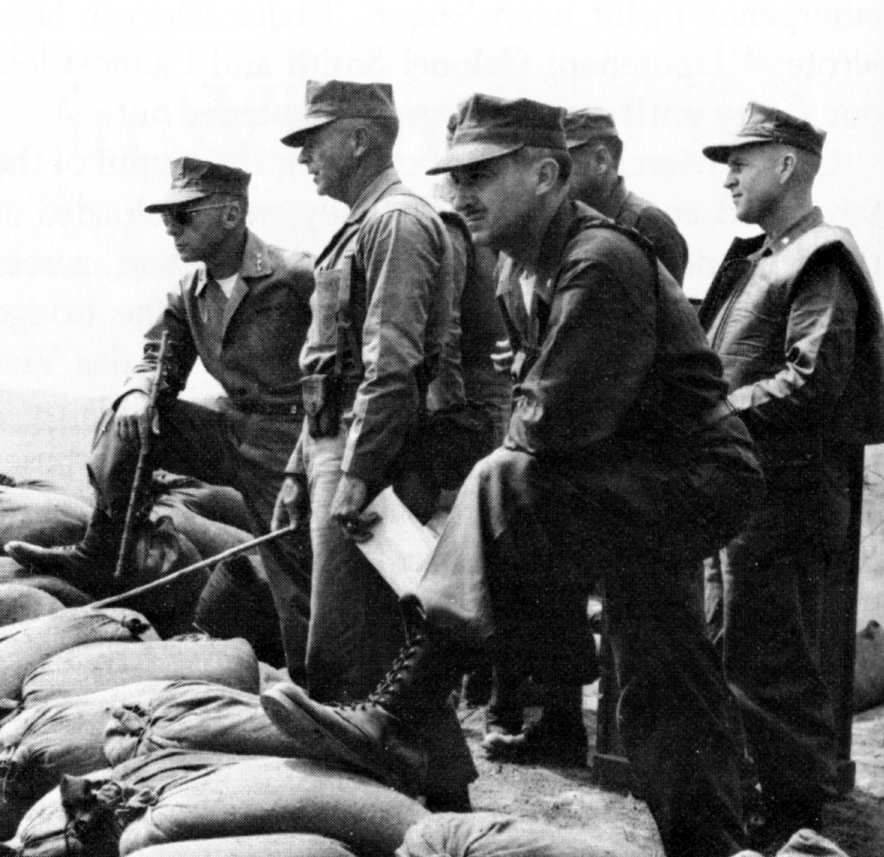 *The U. S. Army helicopters belonged to the Utility Tactical Transport Detachment. 68th Aviation Company, USA, also located at Da Nang. This unit provided the armed helicopter escorts for Marine air operations since the Marines did not have their organic fixed-wing attack aircraft support with them at this time.

**According to Dictionary of United States Military Terms for Joint Usage (JD), JCS Pub l (Washington: Dec 64), p. 169, a TAOR was 'a defined area of land in which responsibility is specifically assigned to the commander of the area for the development and maintenance of installations, control of movement and the conduct of tactical operations involving troops under his control. . . .'