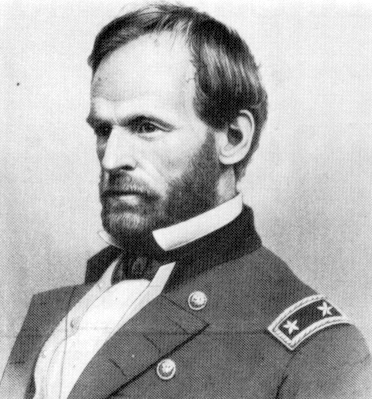 Served under Grant in the West and later made commander of Union forces in the West. His March to Atlanta brought the war to the civilian population. Sherman is the second best-known Union general, and arguably the most reviled, behind Grant and ahead of Ben Butler in each category.

He was sixth in his class at West Point (1840) which earned him a place in the artillery. During the Mexican War he served in California and did well enough to earn a brevet to captain. He was still a captain seven years later, and resigned to see what he could manage in civil life. It wasn't much; he bumped around in various jobs, tried the law, tried banking. Nothing fit, and in 1859 he took a position as superintendent of Louisiana Military Academy (now Louisiana State University).

When Louisiana seceded he moved north, not to join the army but to run a streetcar company in St Louis. He couldn't ignore what was going on around him, and rejoined the army in early 1861, leaping straight in as Colonel of the 13th U.S. Infantry ' in the Regular Army. He fought at First Manassas, acting as a brigadier general with four regiments of volunteers. His leadership was better than average although he thought his troops were bad.

He was soon transferred to Kentucky, working under Robert Anderson, a native son of Kentucky and the hero of Fort Sumter. Sherman didn't last long there, a victim of nerves: he reported wild, enormous numbers of Confederates. There couldn't have been as many as he thought, and even newspapers were right in their criticism. He was dropped, although Henry Halleck saw some promise in Sherman and transferred him. Sherman was still shaky in central Missouri, imagining Rebels under the beds.

Despite this, he was sent into action, which settled him down somewhat. He was unprepared for the Confederate attack at Shiloh, but recovered later in the day and held solidly. Grant was impressed and Sherman was soon promoted to major general. His performance around Vicksburg was not stellar, but Grant approved what he did. Once Vicksburg fell, he sent Sherman on the expedition to Jackson, Mississippi, which he took without much difficulty against Joe Johnston's smaller force. His tactics weren't strong at Chattanooga, but Grant continued to support his protégé and marked him for another independent mission. (Congress gave him their Thanks for his work at Chattanooga.) Ambrose Burnside had got himself tied up in Knoxville, and Sherman solved the problem. He was then shifted back to Mississippi and took Meridian.

When Grant went east at the beginning of 1864, he gave Sherman command in the west. Sherman proved worthy. All the way from Chattanooga to Atlanta he sparred with Joe Johnston, maneuvering when it would save lives, never making a mistake. He would turn Johnston's right or left and Johnston would withdraw a few miles, and Sherman would do it all again. Johnston ran out of ground in front of Atlanta and Jefferson Davis was disenchanted with clever retreats. Sherman did an even better job against the replacement, John Hood. Hood decided to fight, but lost ' and heavily. Sherman paused, reorganizing his army (the three-year men were coming to the end of their enlistments) and wrecking the military value of Atlanta. He then did the unexpected: abandoned the wasted Atlanta, sent part of his troops back to Tennessee to guard against Confederate incursions, and took a sizeable force without supply lines to the Atlantic. Nobody expected operations without a base of supply, nobody expected him to be so blunt in making war on the civilian population. But Sherman wasted no words: War is hell" and there was no point in disguising that from the people who would otherwise support it. If civilians support the war  they prolong it; if they want peace  lives can be saved.

The army marched (and looted) its way to Savannah, where Sherman re-imposed discipline and maneuvered the Confederates out. (He was voted a second Thanks of Congress for the Atlanta-Savannah campaign.) He proceeded up the coast, then making South Carolina, nest of secession, suffer. His reputation fell further (if that was possible) in the South after Columbia burned, but that was mainly the fault of Wade Hampton, South Carolina cavalier, who torched cotton bales to prevent their capture. He bypassed Charleston, forcing its evacuation, and drove Joe Johnston north through the Carolinas, never fighting much but never making a mistake that would have given the canny Johnston an opening.

Johnston surrendered on April 26, outside Durham. Sherman’s terms were mild, so mild that Secretary of War Stanton tried to rescind them. When Sherman arrived in Washington he publicly refused to shake hands with Stanton. During the victory parade his western army marched on the second day, and he featured Black troops and also his foragers (the polite term for looters), the “bummers”.

He stayed in the Army, and President Grant made Sherman General-in-Chief, a position he held until 1884.