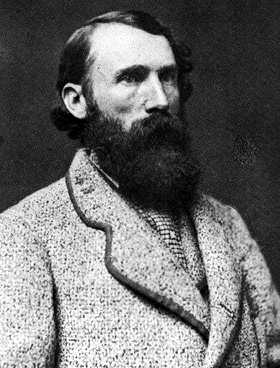 Wrote "Hardee's Tactics" prior to the war. Few generals write best-sellers. However, William Hardee's Rifle and Light Infantry Tactics (better known as Hardee's Tactics) was certainly the best seller in its market, becoming the best-known drill manual of the Civil War.

Hardee was a professional soldier, graduating from West Point in 1838 and serving against the Seminoles and Mexicans. He won two brevet promotions in Mexico, and was wounded as La Rosia before returning to West Point as the tactics instructor and later commandant of cadets. By 1861 he was second-in-command to Robert Lee in the 1st Cavalry.

He was a colonel of cavalry for the Confederacy in March of 1861, then three months later a Brigadier General. His first assignment was in northern Arkansas, recruiting and organizing men from the Ozarks. That didn't last long; in October 1861 he was both promoted to Major General and moved to Kentucky, since it was clear there was going to be action there before there was fighting in the hills of Arkansas. The Confederacy had to withdraw from Kentucky and central Tennessee thanks to the fall of Forts Henry and Donelson, but counter-attacked at Shiloh. Hardee led one of the Corps, fighting well but being wounded.

He recovered quickly, returning to command in time for the evacuation of Corinth, Mississippi. After Braxton Bragg was appointed to command Confederate forces in the west he called Hardee and his troops further east to support the advance into Kentucky, and Hardee ended up commanding the Confederate left at Perryville. He stayed with the abrasive Bragg through Murfreesboro and the Tullahoma Campaign, but finally could not stomach his commander any more. He obtained a transfer to Mississippi to serve under Joe Johnston, but that only lasted a few months before he was moved back to Bragg's army: Bragg had quarreled with Leonidas Polk and sacked him. Hardee got Polk's old Corps. He led this at Chattanooga (after the defeat he declined command of the army, preferring to stay a Corps commander) and through the long and costly Atlanta Campaign.

Hardee didn't think much of Braxton Bragg as a person, nor John Hood as a general. He obtained a transfer out of Hood's army and took command of the Department of South Carolina, Georgia, and Florida. This put him squarely in the way of Sherman's March to the Sea. There wasn't much he could do to Sherman's army, but he preserved the few troops he had, pulling back to the coast at Savannah. Sherman took the city, but Hardee delayed him skillfully, and also evacuated the great majority of his troops. He fell back up the coast, never able to check Sherman more than a few days, until the larger Union army turned his flank. He moved into Charleston, but when Sherman bypassed it Hardee withdrew rather than having his Corps (in name only; most of the troops were coast-defense troops) caught as well as lose the city. He pulled back into North Carolina and joined Joe Johnston in time to fight at Bentonville.

It was his last battle, and the last for his only son, who died there. Afterwards Johnston reshuffled the Army of Tennessee (in name only) and Hardee continued in Corps command. It was only a matter of time, and on April 26, 1865 he surrendered his three divisions (two of western troops, one from North Carolina).

A native Georgian, he had served in the war in almost all parts of the Confederacy but settled in Alabama, where he farmed.