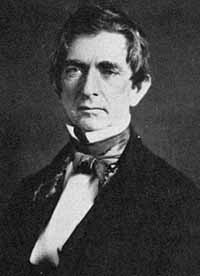 Served as Secretary of State during the Civil War. Largely responsible for keeping European nations from recognizing the Confederacy. William H. Seward served as the Secretary of State for both President Lincoln and President Andrew Johnson. He was born on May 16, 1801 in Florida, Orange County, New York, and attended Union College, graduating in 1820. He passed the bar in 1823 and established his practice in Auburn, New York. In 1830, Seward was elected to the New York State Senate, serving until 1834 when he ran, unsuccessfully, for the governorship of New York. However, in 1838, the people of the state did elect him to the chief executive's post, serving a four-year term. In 1849 and 1855, he was elected to the United States Senate, serving until 1861 when he joined Lincoln's administration as Secretary of State after an unsuccessful bid for the Republican presidential nomination in 1860.

Seward's first major test as Secretary of State was the Trent affair, when a Union naval vessel stopped, boarded, and removed two Confederate officials from the neutral ship. Britain vigorously protested and the possibility that they would enter the war on the Confederate side prompted Seward to return the two men. After the Trent affair, he proved effective in preventing foreign intervention on behalf of the Confederacy.

After the war, Seward stayed in Europe. In Britain, he sat on the commission for claims against the Alabama. In Russia, he negotiated the purchase of Alaska, also known as Seward's Folly" for the belief that Alaska was nothing more than a giant wasteland. Seward left public service when Grant became president. He died on October 10