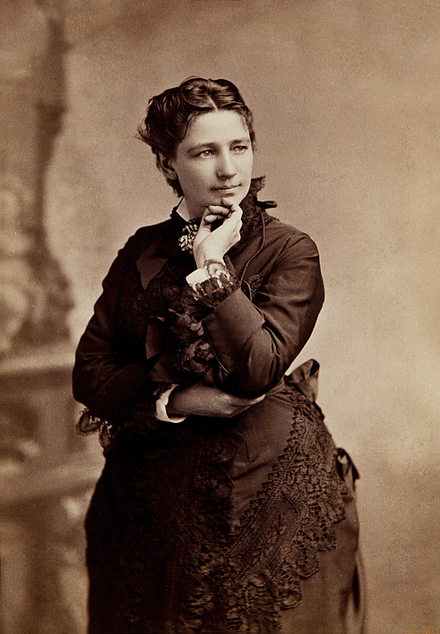 Victoria Woodhull had announced her candidacy in 1871 - it would be 50 years before women could vote, but there was no law preventing women from running for office. She was nominated for President of the United States by the newly formed Equal Rights Party on May 10, 1872, and her nomination was ratified at the convention on June 6, 1872. They also nominated the former slave and abolitionist leader Frederick Douglass for Vice President, but he never acknowledged the nomination.
While many historians and authors agree that Woodhull was the first woman to run for President of the United States, some have disagreed with classifying her as a true candidate for the following reasons:
1. She was younger than the constitutionally mandated age of 35.
Today this is the most cited criticism by political analysts, but election coverage by newspapers does not suggest it was a significant issue in the 19th century.
2. She did not receive any electoral votes or popular votes.
Official election returns show about 2,000 "scattering votes." It is unknown whether any of those votes were cast for her, but supporters contend that her popular votes were not counted because of gender discrimination.
3. She was a woman.
Some of Woodhull's contemporaries believed that as a woman, she was not a full citizen, as she was not entitled to vote. Since the Constitution required that the President be a citizen, she was excluded from holding the office.
Having been vilified in the press for her support of free love, Woodhull devoted an issue of Woodhull & Claflin's Weekly (November 2, 1872) to a detailed account of an adulterous affair between a parishioner, Elizabeth Tilton, and Reverend Henry Ward Beecher, a prominent Protestant minister in Brooklyn. Beecher (brother of the Beecher sisters) supported female suffrage but condemned Woodhull's free love philosophy in his sermons.
A national furor erupted over the story, and US Marshals arrested Woodhull, her husband James Blood and her sister Tennessee Claflin on charges of publishing an obscene newspaper. The sisters were held in the Ludlow Street Jail for the next month, a place normally reserved for civil offenses, but which contained more hardened criminals as well. Ironically, the first female Presidential candidate spent Election Day 1872 in jail.
The arrest prevented Woodhull from attempting to vote in the 1872 presidential election, which was won by incumbent Ulysses S. Grant. And, although she had received encouragement from Susan B. Anthony and other suffragists, Anthony withdrew her support because Woodhull was too outspoken and radical even for them.
Six months later, Blood, Woodhull and Claflin were acquitted on a technicality for publicizing Beecher's affair in Woodhull & Claflin's Weekly. However, they paid nearly $500,000 in bail and fines before being cleared of the charges. Woodhull's target was not the morality of the affair, but the hypocrisy that permitted powerful men to be sexually free but denied such freedom to women.
As a consequence of the story in Woodhull's newspaper, Elizabeth Tilton's husband sued Reverend Henry Beecher for "alienation of affection." Beecher stood trial in 1875 for adultery in a proceeding that proved to be one of the most sensational legal episodes of the era, holding the attention of hundreds of thousands of Americans. The trial ended with a hung jury.
By that time, Colonel Blood had left the Woodhull/Claflin household, and he and Woodhull divorced in 1876. At the same time, the Weekly stopped publication permanently. Woodhull continued lecturing, now more about responsibility and sexuality within marriage. She and Tennie also took part in a challenge to the will of Cornelius Vanderbilt.
Life in England
In 1877, the now-bankrupt Victoria Woodhull and her sister Tennie left to start a new life in England. Woodhull made her first public appearance as a lecturer at St. James Hall in London on December 4, 1877. Her lecture was called "The Human Body, the Temple of God," a lecture which she had previously presented in the United States.
Present at one of Woodhull's lectures was the wealthy banker John Biddulph Martin. They began to see each other and were married on October 31, 1883. (His family disapproved of the marriage.) From then on, she was known as Victoria Woodhull Martin. Under that name, she published the magazine The Humanitarian from 1892 to 1901, remained active in the British women's suffrage movement and various causes, and worked to distance herself from her former radical ideas on sex and love
After her husband died in 1901, Woodhull Martin gave up publishing and retired to the country, establishing residence at Bredon's Norton, Worcestershire, England.
Victoria Claflin Woodhull Blood Martin died on June 9, 1927 at Bredon's Norton at age 88.
Victoria Woodhull was a popular and controversial figure in her day. In many ways she was ahead of her time and was an important trailblazer for women in generations to follow. She advocated for equal education for women, women's right to vote and women's right to control their own health decisions. Above all, she criticized the Victorian ideal of women's place being first and foremost in the home.
Victoria Woodhull Quote:

Rude contact with facts chased my visions and dreams quickly away, and in their stead I beheld the horrors, the corruption, the evils and hypocrisy of society, and as I stood among them, a young wife, a great wail of agony went out from my soul.