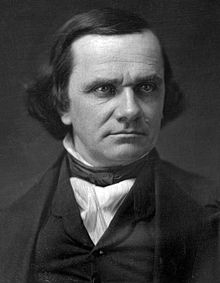 "Ran for President against Abraham Lincoln. Known as a great orator, the debates he held with Lincoln are some of the most famous in American History." Stephen A. Douglas was born in Brandon, Vermont, on April 23, 1813. As a young adult, he learned to make cabinets, but the lure of law and politics pulled him away from his craft. In 1832, Douglas began his law studies at Canandaigua Academy in New York. The following year he moved to Ohio and then to Winchester, Illinois where he continued his legal studies while working as a teacher. After passing the bar in 1834, Douglas established his practice in the town of Jacksonville. In 1836, he was elected to the Illinois House of Representatives, and in 1838, made an unsuccessful bid for the U. S. House of Representatives. However, in 1841, Douglas was appointed to the Illinois Supreme Court where he served until his election to the U. S. House of Representatives in 1842 as a Democrat. In 1847, Douglas was elected to the U. S. Senate. While in both the House and the Senate, Douglass chaired the Committee on Territories, where he advocated the policy of popular sovereignty (letting the people of the territories choose for themselves whether they would allow slavery.) He also supported President Polk's war against Mexico as well as the creation of a transcontinental railroad.

Douglas may be best known for his debates against Abraham Lincoln (vying for Douglas's Senate seat) in 1858. Although Douglas won the seat, Abraham Lincoln's name would thenceforth be known around the country. Douglas introduced the Kansas-Nebraska Bill into the Senate and opposed Kansas's Lecompton Constitution, which would have allowed slavery in the territory, because it violated his belief in popular sovereignty. In 1860, Douglas received the Democratic nomination for President of the United States. However, tension between Southern and Northern Democrats caused a split in the party. Douglas became the nominee for the northern Democrats, and the southern Democrats nominated John C. Breckenridge from Kentucky. Abraham Lincoln, of course, was the Republican nominee and winner of the election, and John Bell of Tennessee ran at the head on the Constitutional Union ticket. Douglas placed second in the popular voting (1,383,000) but dead last in electoral votes (12). Back in the Senate after his defeat for the Presidency, Douglas tried to prevent the Civil war, but once hostilities began at Fort Sumter, he gave his full support to the Lincoln administration. However, he died on June 3, 1861, sparing him from the turmoil of four years of war. He is buried in Douglas Monument Park in Chicago, Illinois.