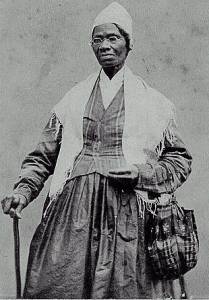 Sojourner Truth was a former slave who fought for emancipation. Sojourner Truth was born Isabella Baumfree around 1797 in southeast New York. She had several owners until she was thirteen, when she went to work for John Dumont. In 1817, the New York legislature granted freedom to all slaves born before July 4, 1799. It did not go into effect, however, for ten years. Truth patiently waited for her freedom, working for Dumont until that day. During that time, she married another slave and had five children. As she neared her emancipation date she learned that Dumont was planning to keep her as a slave, and so she ran away, leaving her husband and children behind.

Over the next few years, several events took Truth away from domestic work and into new arenas. She won two court cases against white people, the first black person to do so. In the first, Truth was able to legally gain the freedom of her son, Peter. In the second case, she won against a couple she sued for slander. She and the couple had been a part of the same religious cult, and the couple had claimed that she tried to poison them. But perhaps the most life-changing event was her religious conversion, which gave her direction and helped her find her calling.

By 1843, Truth had changed her name and was traveling throughout New England preaching the word of God. During her travels, she met Frederick Douglass, and others, who introduced her to the abolitionist movement. She then began preaching on abolition and black freedom, using her experiences as a slave to gain support for her platform. During the Civil War, Truth visited black soldiers, worked as nurse and counseled freed slaves. She continued to work for the rights of African-Americans and women until her death in 1883.