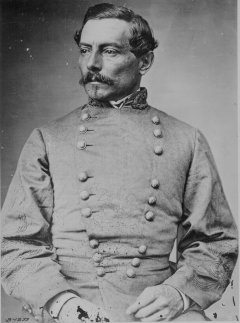 Was in charge of the outbreak of Ft. Sumter and enjoyed success at First Manassas. Later fell into disfavor with the administration when he took his differences with Jefferson Davis public. Pierre Beauregard had a distinguished career in the US and Confederate Armies. He'd graduated second in his class at West Point (1838) and been upgraded from the artillery to the engineers after only a week. Winfield Scott picked the Louisianan for his personal staff during the Mexican War, and Beauregard responded to the honor: he was twice wounded and won two brevet promotions for bravery. (The Army kept its budget down by not giving full promotions for bravery.)

From that highlight, he spent several years pulling obstructions out of the Mississippi. Just at the beginning of 1861 he was appointed Superintendent of West Point, but thanks to his political views he was reassigned less than a week later. It hardly mattered; he resigned his captaincy three weeks later and was promptly in Confederate service.

His first job was besieging Fort Sumter. A man with prickly honor himself, Beauregard worked amazingly well with the feisty South Carolinians. He turned their enthusiasm into productive channels, building a ring of batteries around Charleston Harbor that not only dominated Fort Sumter, they kept relieving US ships out.

Once Robert Anderson had surrendered, and the breach between North and South was final, Beauregard went to northern Virginia. Again, he worked as an engineer, trying to tie together a defensive line under Yankee noses, on the Potomac at Alexandria. He built the Confederate Army of the Potomac, but soon fell back a little from that river and took station around Manassas. His forces were downgraded to a corps on July 20, 1861 ' the day before the First Battle of Manassas.

Joe Johnston may have been promoted over him, but the two men worked well at this juncture. Johnston knew Beauregard had a better grasp of the terrain, and allowed his subordinate to control the battle, while he worked to forward troops to the men on the spot. Both of them agreed that they could have marched on Washington, if only there had been enough supplies.

Beauregard's star was at its zenith in the South. He was the victor of Sumter, and joint-victor of Manassas. Jefferson Davis, a touchy man, was probably annoyed by this, and while he promoted Beauregard to full general (charitably back-dating it to the Battle of Manassas) he shortly sent Beauregard to the western theater.

Beauregard was Number 2 in the west as well, behind Albert Sidney Johnston, one of the fiercest commanders around. Again, Beauregard was given considerable latitude for a subordinate, and drafted the orders for what became the battle of Shiloh. (As befitted a man who worshipped Bonaparte, they were fairly loose and required both a guiding spirit and aggressive subordinates.) When Johnston was wounded on the first day, Beauregard took command, but wasn't aggressive enough and let a probably victory slip away. He consolidated his positions rather than press on with disorganized troops, and overnight the Union brought up more men and counter-attacked.

He had to fall back, and his relations with Jeff Davis went downhill fast. Beauregard was sick, but didn't wait for permission to take sick-leave, and that gave Davis his opening: by special Presidential Order Beauregard was fired. He no longer commanded the Army, nor the Department, of the Mississippi.

He was too useful to leave on the shelf forever, and he was brought back only two months later. Robert E. Lee had organized the defense of the Georgia-South Carolina coast after the Union had grabbed Port Royal as a base; now Beauregard would have to hold Charleston against the US Navy. For over eighteen months he held the city, against naval assault, land assault, bombardment, and blockade. Once the Union was exhausted, Beauregard could be spared.

He came back to Richmond in the spring of 1864, in charge of the area behind Lee's retreating Army of Northern Virginia. He had few troops, but faced Ben Butler, a contender to be the war's most incompetent army commander. Butler had overwhelming force, and if he'd struck quickly could have grabbed Richmond, Petersburg, or simply taken the rail-line in between. Instead, Butler dallied. Beauregard grabbed every man he could, and penned Butler into the Bermuda Hundred bottleneck.

As Grant was edging south towards Richmond and Petersburg he was able to give Butler more of a push, and Butler's next effort was to try and grab Petersburg. Again Beauregard held on, with old men and young boys manning the fortifications, until reinforcements arrived. Butler was sacked shortly afterwards, and his nemesis Beauregard reassigned to the western theater, since there was no point to an independent commander in Petersburg with Lee based there.

Beauregard had also let success go to his head, and produced fanciful schemes involving his taking most of Lee's forces, beating both Butler and Grant, then invading the north. Davis had probably had enough of these by 1864 and found them one more reason to move the little Napoleon" further away.

In September 1864 Beauregard found himself in charge of the whole western theater but without the troops to do much.  He had John Hood's Army of the Tennessee and the troops in Alabama.