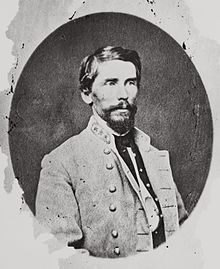 Irish born Confederate officer. He lead corps at Stones River and Chattanooga. He was killed at the Battle of Franklin in 1864. Patrick Cleburne was the Confederacy's highest-ranking foreign-born general, and one of the best of any nationality.

He been born in Ireland (County Cork) on St. Patrick's Day. His first ambition was to be a chemist (British parlance for druggist) but he failed the exams and joined the British Army as a junior officer. That paled after a while and me moved to America and set up as a druggist ' our laws were looser. After a bit he became a property attorney and did very well.

In 1861 he was Captain of the Yell Rifles, which became Company F of the 1st Arkansas State Troops. Almost immediately he became Colonel of the whole regiment, whose number was shortly changed to the 15th. The Confederacy needed troops in Tennessee more than in Arkansas, and his regiment was moved under Hardee's leadership. Cleburne's ability won him promotion to Brigadier General even before the battle of Shiloh. He fought there, then in the siege of Corinth. When Kirby Smith moved into Kentucky, Cleburne's brigade was the advance guard, and he fought at Richmond and Perryville, even being wounded at both.

His reward was promotion to Major General (December 1862) and command of a division. He led them through the battles of 1863: Murfreesboro, the Tullahoma Campaign, Chickamauga. After the disaster at Missionary Ridge, Cleburne's division covered the Confederate retreat; his stand on Tunnel Hill may have saved the army.

Cleburne was more than a bold general; he was intelligent. He proposed in the winter of 1863-64 that the South emancipate those slaves that fought in defense of Southern independence, and that the Confederacy admit that slavery as a whole would have to end in a reasonable time". Probably the idea was too little too late; it wouldn't have had much effect in Europe nor in the North.