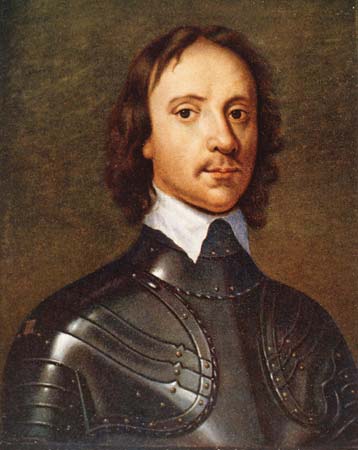 General, Statesman
Oliver Cromwell was born to Robert and Elizabeth Cromwell in Huntingdon, England, on January 30, 1599. The second born of 10 children, Oliver’s beginnings were humble and obscure, leading to the existence of minimal documentation on his early life. Cromwell gained a basic education from a Huntingdon grammar school that was joined to the Hospital of St. John, after which he attended Sidney Sussex College in Cambridge. During this time he earned a modest living off of the rents of the tenants of his owned land. His Father’s death in June of 1617 ended his time at the university, and he returned home to care for his sisters and mother, as well as govern his family’s estate.
Cromwell married Elizabeth Bourchier, the daughter of London merchant Sir James Bourchier, in August of 1620.
Cromwell was elected as a Member of Parliament for Huntingdon in 1628, and rapidly became viewed as no friend of King Charles. Cromwell, after his first service to parliament, fell into depression, and suffered from some unknown illness, which resulted in him having a, “spiritual awakening”, which resulted in an extreme and uncompromising Puritan belief system. With his income and fortunes dropping rapidly, he sold a fair portion of his land in and around Huntingdon, and prompted him and his family to move to the Cambridge town of St. Ives in 1631, where he became a farmer on leased land. Cromwell worked here in such a manner for five years when his maternal, and heirless, uncle died, leaving Oliver a large inheritance in another Cambridge town, Ely, in 1636. With his improvement in hierarchical society, Cromwell was elected to Parliament twice in 1640. Cromwell did not become a nationally recognized political and military leader until the mid-1640s.
The First English Civil War began in August 1642, and Oliver Cromwell joined the war effort of the parliamentary army, leading an early military engagement in the conflict. He compiled a small force of horsemen, secured Cambridge for Parliamentary forces, and then joined the Earl of Sussex at the Battle of Edgehill. Cromwell distinguished himself in battles around Gainsborough in July of 1643. He was then given the rank of Colonel in the Eastern Association army, and made governor of Ely. In 1644 he became a Lieutenant General in the Eastern Association Cavalry, and was instrumental in a Parliament victory at Marston Moor, where his actions earned him the nickname “Ironside”. 1645 saw him placed under Sir Thomas Fairfax as second in command of the new army, and deciding the outcome of the battle of Naseby, which effectively ended the first Civil War.
In 1648, the second English Civil War commenced, and Cromwell returned to the battlefield. He began a campaign by ending an uprising of Royalists in South Wales, and then annihilated the Scottish Army at the battle of Preston. After his campaign in the North, Cromwell returned to London and he, along with 58 others, signed the orders for the execution of King Charles.
After the King’s execution, a Council of State was instituted in place of a monarchy. This council ordered Cromwell to take Ireland in 1649, followed by Scotland in 1650. His actions led to his appointment to Lord General, the high commander of the parliamentary military. Cromwell led his armies into battle at Worcester, in September of 1651, and the resulting victory united England, Scotland, and Ireland, into the Commonwealth.
December of 1653 saw Cromwell appointed Lord Protector, the administrator of government and chief magistrate of the Commonwealth. He was offered the crown at one point by parliament, but declined the offer. A constitution decreed that if he wished to call or dissolve a parliament, he must receive a majority vote from the Council of State. This check on power led to the ruling that a monarch of England, without parliament’s approval, cannot govern.
After serving as the Lord Protector of England for five years, Oliver Cromwell died as a result of a urinary infection on September 3, 1658. He was buried in Westminster Abbey.
In 1660, after the protectorate was overthrown due to lack of leadership, an English monarchy was reestablished with Charles II being named King. In 1661, Cromwell’s body was exhumed from Westminster, tried for treason, and executed, despite already being dead. The corpse was beheaded, and the head was displayed upon spikes atop Westminster hall.
In 1685, the spike supporting Cromwell’s head broke, sending it to the ground. It was recovered and hidden by a soldier, who passed it on to his daughter. It changed ownership many times, appearing in many spectacles, shows, and exhibitions, before finally being purchased by a Dr. Wilkinson in 1960, and given to Sydney Sussex College, where it was given a burial at an undisclosed location on college property.
(Written by Benjamin G. Harvey)
Birth Location:
Huntingdonshire, England
Birth Date:
4/25/1599
Death Location:
London, England
Death Date:
9/3/1658