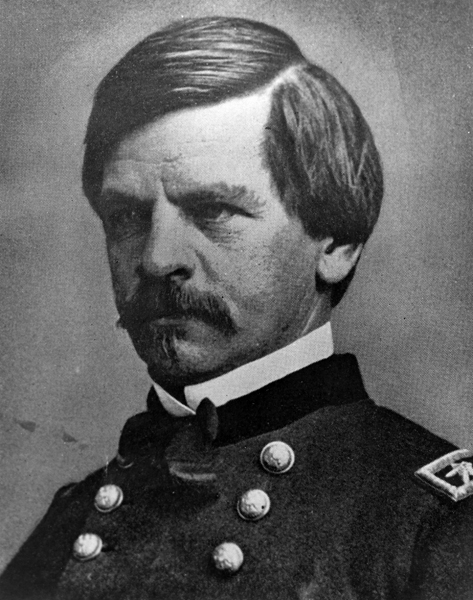 General
Nathaniel Prentice Banks was born in Waltham, Massachusetts, to Nathaniel Prentice Banks Sr. and Rebecca Greenwood Banks on January 30, 1816. Raised in poverty, Banks began work at a cotton mill at a young age. While he worked there he created a debate club and a newspaper for the factory. He later gained an apprenticeship in mechanics for the cotton company, was an editor for multiple newspapers around his hometown, began to study law and was granted acceptance to the bar when he was 23.
On April 11, 1847, Banks was married to Mary Theodosia Palmer. The next year, as a result of his honed public speaking, he was elected from Waltham to the Massachusetts House of Representatives. He was a member of a parallel faction to the Democratic Party, the Free Soil Party. In 1851 he was elected speaker of the Massachusetts House, and reelected in 1852. 1853 saw him picked as the President of the Massachusetts Constitutional Convention. That same year Banks was elected to the U.S. House of Representatives. The Free Soil Party was disbanded in 1853 as well, prompting Banks to join the Know-Nothing Party, which held anti-immigrant, and anti-slavery views. Banks won reelection in 1854, and became a Republican in 1855.
In the winter of 1855-56, the anti-slavery members of the Thirty-Fourth Congress lent their full support to Banks for the position of Speaker, a position that he won. He was re-elected as a Republican in 1856, and was elected Governor of Massachusetts in 1857, where he served from 1858 to 1860. Banks made a strong push to gain the Republican Presidential Nomination, but lost it to Abraham Lincoln at the convention.
After losing the nomination, Banks spent a very brief period in the private sector as the resident director of the Illinois Central Railroad.
In 1861, at the start of the Civil War, Lincoln appointed Banks a Major General of Volunteers, despite him not having any military experience. Banks’ first mission was to keep Maryland in the Union by suppressing Confederate support, a task at which he succeeded. He was next ordered in the spring of 1862 to contain Confederate General Thomas “Stonewall” Jackson’s forces in the Shenandoah Valley. Severely outmatched by Jackson in terms of military strategic knowledge, Banks was driven out of the Shenandoah, and back across the Potomac. General Banks would again come up against Jackson’s forces on August 9, 1862, at the battle of Cedar Mountain, Virginia. This time Banks’ Union forces had the advantage, but were checked by the arrival Confederate reinforcements under General A.P. Hill. General Banks’ was reinforced by General John Pope, and the full force of Jackson’s army bolstered the Confederate forces, leading to a stalemate.
General Nathaniel Banks received new orders to take command of the defenses of Washington D.C. In late 1863, Lincoln tasked Banks with recruiting 30,000 men from the Northeastern parts of the United States. The political background Banks had was instrumental in the success of this task, and the goal was quickly met.
Banks was then sent by ship to New Orleans to take command of the Armies of the Gulf, with orders to assist General Ulysses S. Grant in the taking of Vicksburg, Mississippi, by staging a simultaneous assault on Port Hudson. After 48 days of repeated assaults, the Confederates in Port Hudson surrendered.
General Banks then took military action to prevent the French from moving their troops into Texas and aiding the Confederacy, Securing Brazos Santiago and parts of the Rio Grande River. In early 1864 Banks received new orders to move up the Red River with troops and Gunboats, converge with General Andrew Jackson Smith on Confederate strongholds in Louisiana, then join with Federal forces under General Steele in Arkansas and sweep through the Red River Valley in Eastern Texas. The plan was to decimate Southern cotton production, thus wounding the Confederate economy. The plan started well, with Alexandria, Louisiana, being taken. However, that first success was met with a strategic draw at the Battle of Pleasant Hill, which led to Federal deprivation of resources, and led to a retreat. On top of that, the Gunboats that were supporting Banks’ land forces became stuck in low water, and required the two-week process of building a dam to raise water levels to allow them to escape. Confederate forces, tried to pursue Banks’ forces and attack them, but the Federal army had already retreated out of their range.
With the debacle of the Red River campaign, Banks was relieved of command, and placed on leave in Washington D.C. where he lobbied Congress to support Lincoln’s plans for reconstruction in Louisiana. In August of 1865, General Banks was retired from military service by President Andrew Johnson. Banks returned to his political career, serving as a representative of the U.S. Congress from 1865 to 1873. He also acted during this period as the chair of the Republican Congressional Caucus, and Chairman of the Foreign Relations Committee. Additionally, Congressman Banks was an advocate of Manifest Destiny, and was instrumental in the success of the Alaska Purchase legislation. In 1872 Banks joined the Liberal-Republican party and lent his support to Horace Greely, U.S. Grant’s competitor in that year’s election. Nathaniel Banks was unseated from congress that election, but won reelection as an independent in 1874, before switching back to the Republican Party. He was again defeated in 1877, but was appointed United States Marshal for Massachusetts by President Hayes, and fulfilled the role from 1879 until 1888, when he was reelected to the U.S. Congress.
Suffering from Alzheimer’s, Banks did not receive a nomination for reelection due to the deterioration of his mental state. The remaining years of his life were quiet, and he passed away at his home on September 1, 1894.
(Written by Benjamin G. Harvey)
Birth Location:
Waltham, MA
Birth Date:
1/30/1816
Death Location:
Waltham, MA
Death Date:
9/1/1894