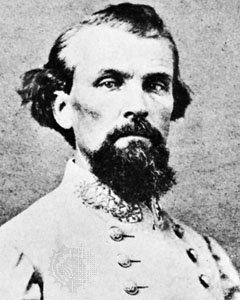 Calvary commander famous for his raids and his victory at Brice's Cross Roads. Absolutely nothing about his background suggested Nathan Forrest would be a good soldier, let alone a great one. Uneducated, he still became a rich man (one of the richest in the country, $1,500,000 in pre-war dollars) from his plantations and slave trading. While he joined the cavalry as a private, the Governor of Tennessee had the bright idea of using Forrest's wealth by having him raise a full battalion at his own expense.

So in October 1861 he was a lieutenant colonel, and in March 1862 Colonel of the 3rd Tennessee Cavalry. His promotion was earned: he had broken out of U. S. Grant's cordon at Fort Donelson, the only redeeming feature of that catastrophe for the Confederacy. Forrest disdained the weak-kneed surrender conference of the Confederate generals, stormed out of the room, then led his cavalry (and a body of infantry) past the Union lines without a shot being fired. With the Union forces pressing into central Tennessee, he covered the retreat to Nashville, but that city had to be abandoned.

The Confederates regrouped in northern Mississippi and headed for the Union army at Pittsburg Landing. There was little mounted troops could do in the woods at Shiloh, but Forrest again commanded the rear-guard, and was wounded. He took part in the evacuation of Corinth, then was promoted to Brigadier General (July 1862) and raised the troops needed to have a full brigade. He took them on his first raid, hitting Murfreesboro, capturing the garrison, destroying track and supplies. The real effect was to throw off the Union advance on Chattanooga ' and that opened the door for Bragg's movement into Kentucky. He fought in that, but his next independent operation was in west Tennessee.

He raided Union supply lines around the turn of 1862-63, choking Grant's overland movement on Vicksburg. To be fair, it was Earl Van Dorn, who grabbed the main depot at Holly Springs. The Confederate command sensed that Forrest was best employed raiding; his command was joined with Fighting Joe" Wheeler's for a raid that failed to achieve most of its targets. It also brought bad blood between Wheeler and Forrest  who said he would never serve under Wheeler again. If Forrest could raid Union-held territory the Union commanders decided to return the compliment.  Colonel Abel Streight headed southeast into Alabama in late April 1863.