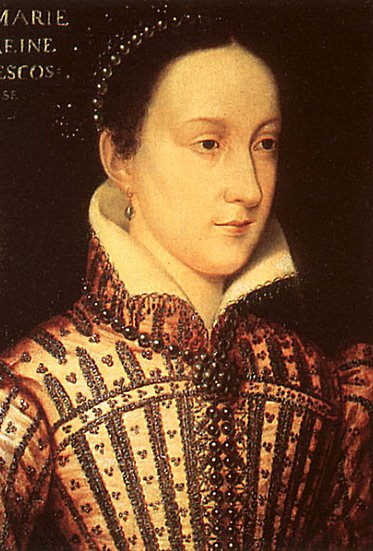 Mary Stuart was born in 1542 in the County West Lothian village of Linlothgow (lin 'loth go). She was the daughter of King James V and his wife Mary, a member of the powerful French Catholic family of Guise. Six days after her birth the King died and Mary became the infant Queen of Scotland. To conduct the affairs of state, however, the baby's mother Mary Guise was selected Regent, destined to rule until Mary Stuart could take her place. At the age of six Mary was packed off to France to be groomed and educated in the French royal household, but more importantly, in view of subsequent events, she evolved into a determined, faithful daughter of the Roman Catholic Church. While Mary was maturing in far-away Paris, profound changes were altering the political and social landscape in Scotland. From medieval times, the Kingdom of the Scots had reached out to France as a diplomatic and military counterweight to the powerful English kingdom just over the Tweed River in the south. By the mid-1500s, however, this alliance was wearing thin. Many Scots perceived their nation as little more than a province of France and resented it. Also, as Protestantism spread through Northern Europe and into England, many in Scotland were converted, a good number to a vigorous, some would say virulent, form of Calvinism espoused by the preacher John Knox. When Knox returned from exile in 1559 he brought a political program that appealed to the rebellious hearts of the Scottish lairds who coveted the rich lands of the church and who wished to rid Scotland of French domination.

As a young child Mary was sent to France to be educated and groomed in the French royal household. In 1558 she married Francis, the Dauphin, the heir to the French throne. When his father, King Henry II died in a hunting accident (check this) Mary became the Queen of Consort. When Francis died suddenly 18 months later, Mary was left with a choice, to remain in Paris, a foreigner and a has been, or return to Edinburgh. The thought of exchanging the sparkling social and intellectual life of Paris for the dreary isolation of Scotland must have been daunting, but Mary had a daring streak and Scotland loomed on a horizon filled with opportunity. Back in Scotland, however, the political landscape, which just a few years previous had strongly favored continued pro-French and pro-Catholic policy, had shifted. During the late 1550s a significant percentage of Scottish lairds had rebelled against this policy. The so-called Protestant faction congregation, part army, part covenant of the faithful, were whipped on by the preaching of John Knox and aided by English soldiers and English money, and by the death of the pro-French regent Mary of Guise, Mary Stuart's mother. The Protestant faction triumphed. It remained to be seen if the return of the Queen could alter the balance of power. Mary started well enough. The Catholic monarch charmed her counselors and for the most part, took their advice, but it was not religion that proved the Queen's undoing; it was her romantic ambition and her lack of prudential judgment.

Returning from the Continent in 1561, the widow of the King of France, Mary Stuart, took on the Scottish lairds and for a time charmed them and took good counsel in state affairs. She was a Catholic ruler of an increasingly Presbyterian nation, but for the most part deflected attempts to marginalize her power. The Queen's downfall came not from her religion, but from her romantic lack of judgment. Mary Stuart's cousin, Elizabeth I of England, was also a ruler without an husband, but unlike the English queen who was not at all adverse to using her sexuality as a weapon, Mary made her love affairs the center of life not the instrument of her rule. In so doing she combined the granite stubbornness of her Scottish heritage with flirtatious demeanor of a French coquette. She has emerged as one of history's silliest women. Her marriage to Henry Stuart, Lord Darnley, lasted only about 19 months. Darnley was an unwilling but jealous husband who, in a fit of rage, killed Queen Mary's very private secretary, David Riccio. Probably in revenge Mary connived in the subsequent murder of Darnley and then ran off with his killer, James Hepburn, Earl of Bothwell. Catholics and Protestants alike were horrified with this sordid soap opera. The streets of Edinburgh rang with the cry, "Hang the whore." In June 1567 she was captured and forced to abdicate in favor of her infant son James. She escaped and fled to England where she became Cousin Elizabeth's difficult, unwanted, and ultimately poisonous guest until her execution. Deeply religious and yet almost devoid of any moral sense, Mary was the most fatally charming of the rulers in the Stuart dynasty.