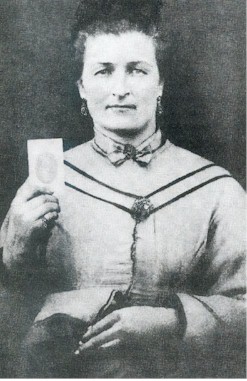 Malinda Blalock served as a Confederate soldier under the name Sam Blalock. William McKesson (Keith) Blalock and Malinda Pritchard met as children in a one room school house in Watauga County, N.C. under the shadow of Grandfather Mountain. In April 1861, the couple were married. The marriage was a surprise to the whole county as the two families had been feuding over one thing or the other for over one hundred and fifty years but theirs was a true love match.

The entire state of North Carolina was severely divided over the question of the legality of secession but never more so than in the small mountain community the Blalocks called home. When a Confederate recruiting officer passed through that area, Keith, opposed to Lincoln but an ardent Unionist, felt compelled to follow some of his fellow townsmen in signing up with the 26th N.C. Infantry commanded by future governor Col. Zebulon Vance. All along it had been his intention to join a unit he figured would soon be sent north to Virginia to fight the Yankees. Once there he planned to slip through the lines and join up with the first Federal unit he came in contact with. Fearing for the safety of his young wife at the hands of the secessionists should his plan become known, he made sure the town's secessionists saw him march away with the 26th.

Malinda had plans of her own. Barely had Keith began his march to the depot that would carry him to the war when he noticed a light young man marching beside him. It did not take him long to notice the new recruit with short hair covered by a forage cap was none other than his wife, Malinda. At the enlistment station in Lenoir, N.C. she signed her enlistment papers as twenty year old S.M. (Sammy) Blalock, brother to William McKesson Blalock.

The one thing the Blalocks hadn't counted on was where their new outfit was bound. Instead of being sent to Virginia, the 26th was assigned to Kinston, N.C. in the eastern part of the state, an area with very little enemy activity at that time which put a serious kink in Keith's plan.

Keith turned out to be a better soldier than expected being appointed a brevet sergeant almost immediately. His men were fond of him and quick to obey his orders. His standing order to Sammy" was "he" was to stay as close to him as possible.