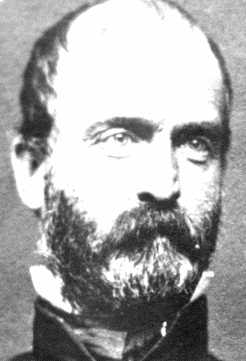 Led "Pickett's Charge" at Gettysburg. A strict US Army nearly lost the service of Lewis Armistead before he began a career. He lost his temper at West Point and broke a plate over fellow-cadet Jubal Early's head, and was kicked out. That might have been the end of him, but he found a back-door and was directly commissioned into the infantry almost on time with his classmates.

He served with great distinction in the Mexican War, earning two brevet promotions (the Army's cheap way of rewarding good service without pay) and being wounded at the battle of Chapultepec.

He left the Army in 1861 as a captain, joining the Confederacy and becoming a major within weeks, a colonel (57th Virginia) in months. At first he operated in western Virginia, and did well enough to be given a brigade (April 1862) in eastern Virginia, where bigger events were afoot. He led it through the Peninsular Campaign, fighting at Seven Pines and then through the Seven Days Battles. After Lee had preserved Richmond, Armistead's brigade was reorganized into the Army of Northern Virginia, and he rode off to fight at Second Bull Run, then Antietam. He was wounded there, but not badly, and recovered in time to lead his men at Fredericksburg. (It helped that the unit wasn't heavily engaged.)

His brigade was part of Longstreet's detachment that operated in south-eastern Virginia, accomplishing little, but at least not straining the supply capacity in central Virginia. (This also meant he missed Chancellorsville.) He was back with the Army of Northern Virginia for the Gettysburg campaign. His troops were not engaged until the third day, when he was one of the leaders of Pickett's Charge. He personally got as far as the Union batteries, and was mortally wounded amidst the guns of Cushing's Battery.

He was taken prisoner while wounded, and died two days after the battle.