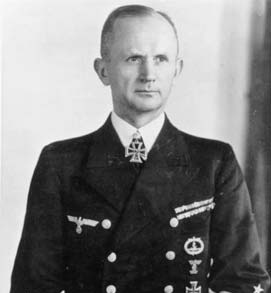 Commander of the German Navy and Submarine Force under Hitler. Planned U-Boat operations. Succeeded Hitler in 1945. Sentenced to 10 years in prison by Nuremberg court. Karl Dnitz served aboard submarines in World War I. He was appointed chief of the Submarine Force in 1935.

Dönitz was made a rear admiral in 1939. During World War II he planned and led the U-boat war against the allies in the North Atlantic. He devised the U-Boat wolf pack attack strategy on allied shipping which nearly cutoff all supplies to Great Britain. In response, the allies instituted convoys and air cover to protect shipping.

During the war his ideas and strategies often collided with the philosophies of Admiral Eric Raeder, the naval commander in chief, who favored surface operations. Dönitz was promoted to admiral in 1942 and replaced Raeder the next year.

As the war dragged on, the allies' material advantage and innovative tactics tipped the balance in their favor. By mid-1943 the allies were inflicting a tremendous amount of damage and casualties to the German submarines, a loss from which Dönitz could not recover. Near the end of the war, Hitler named Dönitz as his successor, and he became the leader of Germany for one week on Hitler's death on April 30, 1945.

Dönitz was tried at the Nuremberg Trials and sentenced to ten years in prison. He died in 1980.