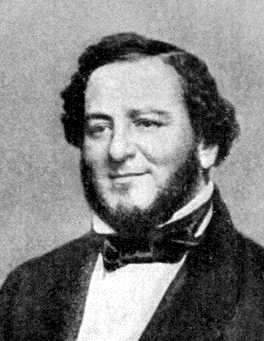 "Served as Confederate Atorney General, Secretary of War and Secretary of State." Born on the island of St. Croix in the West Indies to an English Jewish father and a Portuguese Jewish mother on August 6, 1811, Judah P. Benjamin would rise to serve in several of the highest positions in the Confederate Government. The Benjamins migrated to America while Judah was still a young boy, first to Savannah, Georgia, and then to Wilmington, North Carolina. Later, he attended Yale University for a couple of years but failed to earn a degree. Instead, he moved to New Orleans where he studied law, reading for a clerk of the notary. In 1842, he was elected to the Louisiana State Legislature where he served until 1844. In 1853, Benjamin was elected to the U. S. Senate as a Whig. In 1859, he was reelected to the Senate, but this time as a Democrat.

On February 4, 1861, Benjamin resigned his Senate seat in order to serve the South. The same month, he was appointed the Attorney General for the Confederate States. In August 1861, President Jefferson Davis named him acing Secretary of War, and in November, was officially named to the post until February 1862, when Davis appointed him Secretary of State for the Confederate States of America, a position he held to the end of the Civil War. After the conclusion of the war in 1865, Benjamin moved to England, via the West Indies. In England, he practiced law and worked in the magazine and newspaper industry. In 1883, Benjamin moved to Paris, where he died on May 6, 1884. He is buried in the Pere la Chaise Cemetery.