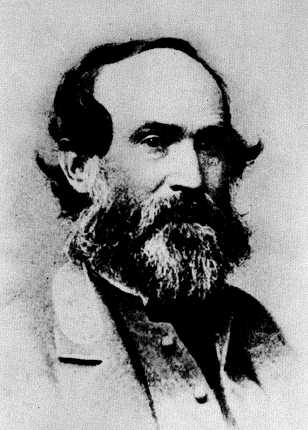 "Commanded a division in the Army of Northern Virginia. His corps threatened Washington, D.C. briefly in 1864." Jubal Early went to college at West Point and graduated in 1837. He did well enough in school to get into the artillery group (artillery had the second pick of graduates) but after a year he quit the army. He went into law and politics, serving in the Virginia General Assembly. He was selected to become a member of the Virginia Secession Convention, where he voted to stay in the Union. But loyalty to his state was stronger than to the U.S.; when the majority voted to leave, he went with them.

He was immediately made Colonel of the 24th Virginia and in June was raised to command a brigade. He fought at First Manassas and when he was promoted to brigadier general it was back-dated to reflect his fighting there. In the spring of 1862 his brigade was moved down to the James-York Peninsula to meet McClellan's threat; he fought and was wounded at Williamsburg. He recovered in time to fight at Malvern Hill, one of Lee's worst attacks. He particapted in Lee's further campaigns in 1862, fighting at Cedar Mountain and Second Manassas (as part of Jackson's Corps), then he took command of Baldy Ewell's division just before Antietam. At Fredericksburg he led the division well enough that the Confederate Congress promoted him major general. He fought on through Chancellorsville and the Gettysburg campaign, and temporarily took over A.P. Hill's Corps during the Mine Run Campaign.

That was his first taste of independent command, an experience fostered over the winter of 1863-64 when he was sent to the Shenandoah. Lee called him back in February and he fought at The Wilderness, then when A.P. Hill was unwell he commanded 3rd Corps at Spotsylvania. On Hill's return he dropped back to commanding his division, but when Ewell had to be relieved, Early was the clear choice.

Once Lee linked up with Beauregard's force at Richmond he could spare a few men for the Shenandoah and Early had experience there. He was sent there with his Corps in June. Early started aggressively: he sortied up the Valley, crossed into Maryland, was checked at Monocacy Creek, and ran out of steam in front of the Washington defenses. His artillery shelled Fort Stevens, where President Lincoln watched the engagement. Early withdrew to the Shenandoah but sent his cavalry to Chambersburg, Pennsylvania which they burned.

His success drew Grant's attention to the Shenandoah. If the Confederacy controlled the Valley, they could threaten Washington any time they chose. Grant sent Phil Sheridan to clean things up. Sheridan drove Early back, both beating his army and devastating the Valley so it could never support another Confederate campaign. After Sheridan was through with him, Early stayed in the southern end of the Valley, but most of his troops were recalled to Petersburg in December. In March 1865 Sheridan casually destroyed the last of Early's troops, then moved to Petersburg himself.

Lee sacked Early, for two reasons. First, Early had lost the confidence of the citizens; second, Lee couldn't defend his subordinate against criticism without showing just how weak the Confederate army was. Early slipped away to Mexico, unwilling to face the prospects of Reconstruction. But he was soon back, resuming his legal practice and dabbling not in politics but in history. He became president of the Southern Historical Society and used his pulpit to defend Lee and attack Longstreet. Longstreet laughed last, however, surviving Early by a dozen years.