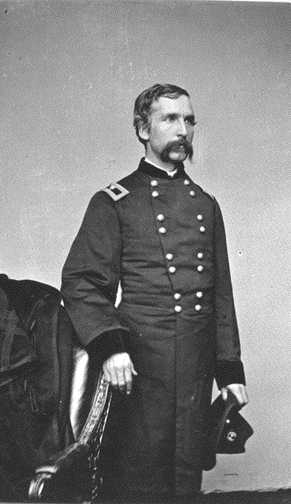 "Served at many of the major battles of the war, he is most famous for his command at Little Round Top during the battle of Gettysburg. He received the Medal of Honor for Little Round Top." Few generals have become literary lions to the degree of Professor Chamberlain.

His military career began slowly, when in 1862 he took a year's leave from Bowdoin College (where he taught modern languages) for travel in Europe. He changed his mind and instead joined the army, immediately becoming Lieutenant Colonel of the 20th Maine. According to story, he was offered instant command, but said he should wait until he learned the job. It didn't take him long: nine months later he was Colonel of the regiment. It was a busy nine months: he fought at Antietam, Shepherdstown Ford, Fredericksburg, and Chancellorsville.

His most famous action was at Gettysburg, on July 2, 1863. He was in command on Little Round Top when Longstreet's attack was close to breaking the Union right. Lawrence held his men steady under the fierce pressure, then as ammunition ran low, he sensed the moment. Rather than fall back, the prudent thing to do, he led a bayonet charge. It swept the Confederates away, and bought time for reinforcements to secure the ridge. His decision may have saved the Union, or that may be hyperbole, crediting too much to a single individual.

For his leadership he was awarded the Medal of Honor, and also received his second wound (first one at Fredericksburg). He missed much of the rest of the year while recovering from the wound, then malaria, and had to be assigned light duties. He resumed command in May 1864, in time for Cold Harbor, which he survived unscathed.

He was promoted to brigade command in June 1864, but hardly had time to make a difference before being felled with his third wound. (The surgeons said it would kill him, but it took fifty years to develop.) Grant promoted him on the spot, actually on the stretcher, to brigadier general. Chamberlain was brave, and unlucky: after another slow recovery he was wounded a fourth time (during the Siege of Petersburg). This time it wasn't serious, and he led his men in the final stages of the war. He fought at Five Forks, then the pursuit to Appomattox. In recognition of his service at Gettysburg he was given formal command of the troops to whom the Army of Northern Virginia surrendered.

After the war he was a bit late in returning from his year of leave to Bowdoin, but they forgave him and he was eventually president of the college, and even Governor of Maine. He also wrote his memoirs, The Passing of the Armies, which sealed his fame. He was a hero for being in the right place at the right time, and doing the right thing.