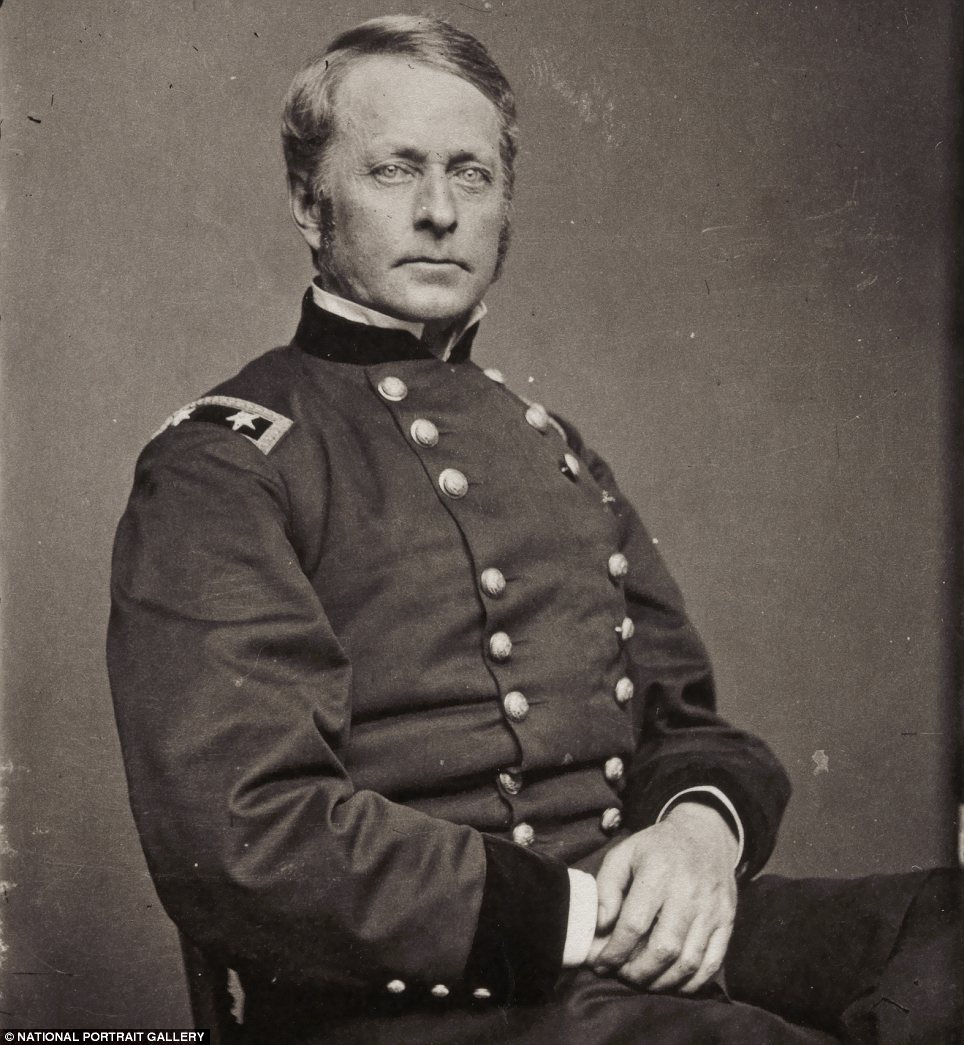 Commander of the Army of the Potomac but relieved after being defeated at Chancellorsville. Joseph Hooker was a better conniver and carouser than army commander, but he was a solid Corps commander.

He'd been to West Point (class of 1837) and served in the artillery and on the staff in Mexico. He won three brevets but also mixed in politics with his superiors, testifying against Winfield Scott in a Court of Inquiry. He took two years of leave (procedures were looser in those days, but was also a way for tempers to cool) and then resigned to make money in California, farming and speculating in land.

When the Civil War broke out he became a colonel in the California Militia, but it didn't take him long to drop that and come east to see what he could find. He watched the first battle of Manassas as a civilian, and felt that he could do better. He wrote to Lincoln saying as much and was made a Brigadier General of Volunteers (the Regular Army wasn't so keen to have him back). He commanded first a brigade, then a division as the Army of the Potomac trained around Washington, and he stayed at the head of his division as McClellan undertook the Peninsular Campaign. In the siege of Yorktown he took good care of his men (he always looked out for the men in the ranks, a point in his favor), then did particularly well at Williamsburg. Neither of these actions need have been fought if McClellan had been bolder, but it takes nothing away from Hooker that he did well in unnecessary battles. He was promoted to Major General (still of the Volunteers) for his work at Williamsburg.

He fought at Seven Pines, then through the Seven Days Battles, even regaining some laurels for McClellan's humiliated army by recapturing Malvern Hill after the Army of the Potomac had evacuated it. He was given his nickname by a journalists or telegraphers slip in a report; there was fighting, and there was Joe Hooker, but there wasn't really a Fighting Joe.

His division was transferred back to Washington, then around to serve with John Pope, and so he ended up fighting at Second Manassas. He may have had ideas about what went wrong the first time, but he wasn't able to improve the result on the replay. Still, he'd done well. With the problems the Army of the Potomac had, Hooker was one of the brighter spots, and he was promoted to command the I Corps just in time for Lee's invasion of Maryland. He led his men at South Mountain, then in the early morning attack at Antietam, where he was soon wounded.

He was only out of action for six weeks, and put in charge of the V Corps for a week before Burnside (the new commander of the Army of the Potomac) reorganized it into three two-Corps Grand Divisions'. Hooker was given the Center Grand Division  which saw little action at Fredericksburg and none during the Mud March.

When Burnside was dropped Hooker replaced him.  Lincoln had confidence in Hooker's fighting skills.