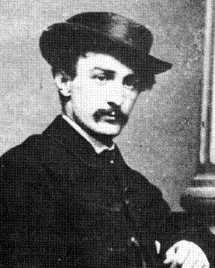 Assassinated President Lincoln during at play at Ford's Theater. John Wilkes Booth was born near Bel Air, Maryland on May 10, 1838, to a prominent acting family. He began his acting career when he was about seventeen years old and was involved in that career at the outbreak of the Civil War. Booth did not enlist in the Confederate Army, but he did harbor strong Southern sympathies.

From the beginning of the war Booth hatched many schemes to kidnap President Lincoln and use him as a pawn for prisoner exchange, but his plans were usually spoiled for one reason or another. Finally, after the fall of Richmond and the surrender of General Robert E. Lee's Army of Northern Virginia in April 1865, Booth changed his plans from kidnapping to assassination.

On the night of April 14, 1865, while President Lincoln, his wife Mary, and Major Henry Rathbone were enjoying a play at Ford's Theater in Washington, D.C., Booth slipped into their box and shot the President in the back of the head and stabbed Major Rathbone. In his escape, Booth jumped from the box onto the stage, breaking his ankle. However, he still managed to elude capture by Federal officials.

Booth left Washington on horseback and met up with fellow conspirator David E. Herald, who had just tried to kill Secretary of State William H. Seward, and proceeded to the home of Dr. Samuel Mudd. Dr. Mudd set Booth's broken leg, and he and Herald continued their escape to Virginia. However, while hiding in a tobacco barn on the property of Richard H. Garrett in Port Royal, Booth and Herald were surrounded by Federal troops. Herald surrendered to the troops, but Booth refused and the barn was set on fire. Booth died from a gun shot which was fired either by Booth or from one of the troops outside the barn.

Booth's fellow conspirators were Mary Surratt and her son, John; Lewis Thorton Powell; George Atzeroldt; David Herald, and Dr. Samuel Mudd. Many were captured, tried, and hanged. John Surratt escaped the country and Dr. Mudd spent several years in prison at Fort Jefferson in the Dry Tortugas before being pardoned by President Johnson.