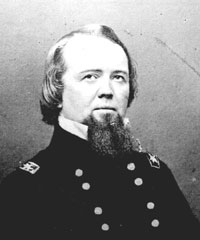 Went from command of the Army of the Mississipi to the Army of the Potomac but alienated his troops with his infamous "Address" on taking command. In less than four months he was replaced by McClellan. John Pope was a native Kentuckian, a professional soldier, and given more responsibility than his talents merited.

He'd been an outstanding student at West Point (Class of 1842) and posted to the creme-de-la-creme, the Topographical Engineers. He did well in peacetime, and during the Mexican War, where he won two brevets. He was marked for high places, although his rank hardly reflected it, for he was still a captain fourteen years after graduating.

Proximity to politicians has hurt few military careers. Pope commanded Lincoln's escort before the 1861 inauguration and was promptly promoted from Captain to Brigadier General of Volunteers. His organizational skills were then put to use in a string of commands in Illinois and Missouri as the Union tried to make armies out of volunteers.

He did well, and was given command of an Army of the Mississippi' which was not very large but stronger than any nearby Confederate force.