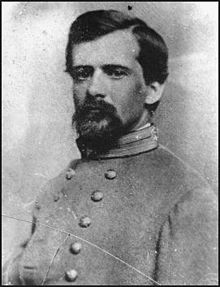 "Surrendered to McClellan early in the war but later returned to serve under Beauregard, Bragg and Kirby Smith. He was killed in actions around Petersburg." Pegram was another of the sons of the South who thought more of honor than money ' else he would not have chosen a military career. He graduated from West Point (1854) and was a dragoon in US service. In 1861 he went with his state (Virginia) and was promptly jumped from lieutenant to lieutenant colonel.

His first command was in western Virginia. At the battle of Rich Mountain (July 11, 1861) a Union force under Rosecrans and McClellan surrounded his force. Half broke out, but Pegram was captured. His defeat was one of the stepping-stones in McClellan's successful west Virginia campaign, the campaign that catapulted him to command of the Army of the Potomac by the end of the month.

Pegram wasn't imprisoned long, and when exchanged he was posted to the cavalry on the other side of the Appalachians. For a bit he was chief of engineer to Beauregard, then Bragg; he then rose to be Kirby Smith's Chief of Staff. He finally got back into field command with a cavalry brigade, which was detached to support Forrest's raid on Murfreesboro. He went on another raid, into Kentucky, then in November 1862 he took command of a division of cavalry in Forrest's Cavalry Corps. That took him in the battle of Chickamauga, the last action he saw in the western theater.

The next month (October 1863) he received a transfer (which he'd requested) to his home state. He took command of an infantry brigade in II Corps of the Army of Northern Virginia in time for the Mine Run Campaign. The next spring he was wounded at the Wilderness, and returned in July, when the whole division had been moved out to the Shenandoah Valley under Jubal Early. He fought at the third battle of Winchester, which broke the Confederate strength in the Shenandoah. Casualties were heavy, and earned him promotion when his division commander (Stephen Ramseur) was transferred to take command of another division. Pegram was never promoted to Major General, but he led the division the rest of his life, through the bitter dregs of the Valley Campaign, and on to Petersburg when the remnants of Early's men were transferred there.

He married during the long, cold winter of 1864-65, in Richmond. The Confederate capital was starved of entertainments, and his wedding was a social highlight. On February 6, 1865 he was killed at the battle of Hatcher's Run, when his division and Little Billy Mahone's fought off a Union raid on Lee's flank.