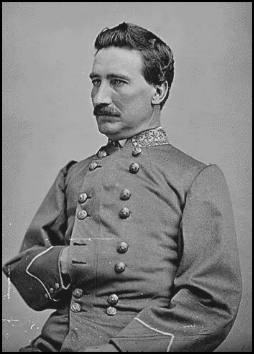 Confederate cavalry commander. Served for the entire duration of the War. Brigadier General John D. Imboden was born in Staunton, Virginia. He attended Washington College for two terms, but didn't graduate. He taught school for a while at the Virginia Institute for the Education of the Deaf, Dumb and Blind in Staunton. Although a competent teacher, he chose to study law and opened a practice in Staunton.

He had a run at state politics, with lackluster results. Although he did serve in the state legislature, he was unsuccessful in his bid to be a representative at the Virginia Secession Convention.

Imboden entered service at the start of the war, serving first as commander of the Staunton Artillery at Harper's Ferry, after its initial capture.

He fought at 1st Manassas, where he was wounded by a shell fragment. He then organized the Virginia Partisan Rangers. The unit was redesignated the 62nd Virginia Mounted Infantry, which Imboden led at Cross Keys and Port Republic.

He commanded a brigade of cavalry under Jeb Stuart at Gettysburg. During the Confederate withdrawal after the battle, Lee charged Imboden with escorting the train of thousands of wounded back to Virginia.

Arriving at Williamsport, Imboden found the pontoon bridge destroyed, and Federal cavalry attacked the wagon train of wounded. Imboden, with the river at his back, put on a stubborn defense until General Fitz Lee's cavalry arrived and the Federals were driven off.

He commanded a brigade of Ransom's Division of 2nd Corps in 1864.

After a bout with typhoid in the fall of 1864, Imboden finished his wartime service performing prison duty in Aiken, South Carolina.

After the war, Imboden practiced law in Richmond, Virginia, then spent his last years in the mining industry in Washington County.

He died in Damascus, Georgia in August of 1895, and is buried at Richmond, Virginia.