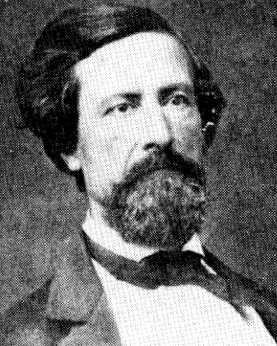 "After getting conflicting orders from his leaders Pemberton found his army unable to fend off Grant's army. Pemberton retreated to Vicksburg expecting in vain for Johnston to reinforce him. Eventually, he surrendered the city." John Pemberton blew his most important assignment, and was not forgiven for it. He was a Pennsylvanian, and a West Pointer (Class of 1837). He served with the artillery in all available American wars: against the Seminoles, the Mexicans (earning two brevets), the Mormons, and on the frontier.

He'd married a Virginia belle and when secession came he went with his adopted state. His first positions were with Virginia infantry, but already by June 1861 he was back with the artillery. He was quickly identified for promotion, and commanded a brigade around Norfolk, training them in what was then a quiet area. In December 1861 he was moved to a more active coastal sector, down in South Carolina. The Union had seized Port Royal Island as a blockading base; it also threatened landings up and down the Atlantic coast. Robert E. Lee organized the whole coastal area, and Pemberton was one of the sector commanders. He took over from Lee in March 1862 and held the position until late September.

He was transferred to Mississippi (commanding the forces there and in Louisiana east of the Mississippi River) in October 1862. This was a much bigger challenge, since it was in the middle of a campaign: the defense of Vicksburg. Grant was a more energetic commander than Pemberton, and did what was considered impossible: he moved his army around Vicksburg from the south-west, putting it out of supply. Pemberton had a dual responsibility: garrison Vicksburg and keep his army intact. He split his effort, and did neither well. He didn't send enough troops to defeat Grant, and then withdrew the battered forces into Vicksburg. The result was more prisoners for Grant when Pemberton finally had to surrender. (Joe Johnston didn't have enough troops to distract Grant from the siege.)

Pemberton was vilified in the South: he wasn't Southern by birth, and had surrendered an Army rather than fight to the death for glory. The Union eventually exchanged him in May 1864 and Jefferson Davis had to figure out what to do with a competent but unpopular officer. There was no chance of giving him high command: too many people didn't trust him and wouldn't serve under him. He offered to serve as a private, as a way of regaining respect. Pemberton was finally put back into the artillery, as only a Lieutenant Colonel (down from Lieutenant General) and put in charge of Richmond's artillery during the long siege.

He lived on a Virginia farm after the war, not loved by his adopted country nor his home state.