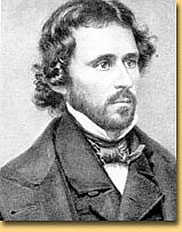 "Commanded the Union Army's Western Department early in the war, but was removed shortly after issuing a proclamation freeing the slaves in Missouri. The proclamation was rescinded by Lincoln." John Fremont was a Georgian, but an abolitionist. He studied at Charleston College but was expelled; still, he had learned enough math to work from 1833 to 1835 as a mathematical instructor for the U.S. Navy. He was appointed a second lieutenant in the Topographical Engineers in 1838 ' one of the few non-West Pointers to be directly commissioned. He explored the area between the Missouri River and the Canadian border from 1838 to 1842, then moved south to find an overland route from the Mississippi to the Pacific.

The Mexican War found him in California, and in 1846 he became a major of a battalion of California Volunteers. Commodore Stockton raised him to lieutenant colonel and ordered him to act as Governor of California. But Stockton was a Navy man, and General Stephen Kearny had been sent to California to establish a government. It got nasty, and ended up with Frémont court-martialed in Washington on charges of mutiny. He was clearly guilty, and convicted, but allowed to resign rather than be expelled. (President Polk later pardoned him.) He moved back to California, and when gold was discovered on his property he became a rich man. He also returned to survey work, running the boundary line on the Mexican border in 1849.

The 49ers raised the population of California, and in 1850 it became a state. Fremont became a Senator, for a shortened one-year term. He served as a Democrat, but in 1856 ran as the Republicans' first Presidential candidate, and the first from the west coast. He lost, beaten by James Buchanan.

When Lincoln was elected he had to find something for his political forebear. He was put in charge of the Western Department, with headquarters at St. Louis, Missouri. He didn't provide much support for his predecessor, Nathaniel Lyon, who attacked a larger Confederate force at Wilson's Creek. Frémont's political judgment was shaky. In August 1861 he emancipated the slaves in Missouri, a step which Lincoln had to reverse himself after Frémont refused to withdraw his order. Frémont's wife, a Senator's daughter, sped to Washington and rowed with Lincoln, but he would not back down.

Frémont enjoyed command, and ignored or sidetracked efforts to replace him (orders were lost, or never delivered) and it took a secret mission to fire him. A staff officer had to be disguised and slipped past the guards at Frémont's headquarters to personally hand over the order relieving him.

Even then Lincoln was not rid of the man, and appointed him to the Mountain Department, partly West Virginia and partly western Virginia. His job was to catch Stonewall Jackson, but Jackson out-maneuvered all Frémont's forces and Frémont was clumsy when Jackson finally moved against him.

He'd botched his opportunity in command, but wouldn't step down when the somewhat more competent John Pope was appointed. He had to be fired from his job, but wouldn't resign from the Army until June 1864, drawing an unearned salary as a major general.

When he did withdraw, he had something else on his mind: running for President again. A faction of Radical Republicans wanted him to replace Lincoln, and he toyed with it until September. He pulled out, claiming it was to allow Lincoln a better chance against McClellan, but maybe he cut a deal to ensure the removal of Postmaster General Montgomery Blair, too moderate for the Radicals.

After the war he served at Governor of the Arizona Territory.