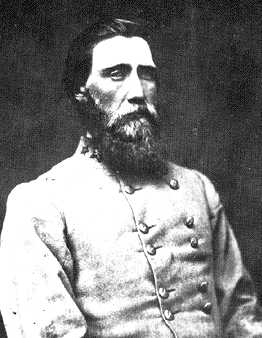 Led his troops in the Army of Northern Virginia. Later fought Sherman in the Battle of Atlanta. John Bell Hood, the youngest man to achieve the rank of full General in the Confederate army, was born on June 29, 1831 at Owingsville, Kentucky. After graduating from West Point in 1853, he was assigned to the 2nd U. S. Cavalry in Texas. While serving with the 2nd Cavalry, Hood met many future Confederate officers, including Robert E. Lee.

On April 16, 1861, just a few days before the bombardment of Fort Sumter, Hood resigned his commission in the Regular Army and offered his services to the South. He was commissioned a First Lieutenant in the 4th Texas Cavalry rising to the rank of Colonel by October 1861. In March 1862, he was promoted to Brigadier General, taking command of a brigade in the Army of Northern Virginia and seeing action at Seven Pines and the Seven Days battles. The day after those battles, Hood was given command of a division, which he led at Antietam (after which he was promoted to Major General) and Fredericksburg. After temporary duty in North Carolina, Hood was back again with the Army of North Virginia. He led his division at Gettysburg, where he lost an arm. In September 1863, Hood was assigned to the Army of Tennessee, where he commanded a Corps under Longstreet at the Battle of Chickamauga, losing a leg. While with the Army of Tennessee, he was promoted to Lieutenant General at the beginning of February 1864 and by the end of the month, was elevated to the temporary rank of General.

During the Atlanta Campaign, as the Union Army pushed the Confederates to the outskirts of Atlanta, President Jefferson Davis replaced the popular Joe Johnston with John Bell Hood at the head of the Army of Tennessee. In attempt to forestall the Union Army, under the command of William T. Sherman, Hood commenced a series of attacks at Ezra Church, Lickskillet, Peachtree Creek, and Utoy, which failed, and Atlanta was besieged. Hood eventually evacuated Atlanta, and, in an attempted to decoy Sherman out of Georgia, invaded Union-occupied Tennessee, threatening Sherman's lines of supply and communications. However, Sherman marched to the sea, living off the Georgian land thus far untouched by the war.

Hood marched his ill-clothed and ill-fed army north in the fall of 1864, eventually besieging the heavily defended city of Nashville in December. The Union forces, under the command of General George Thomas, easily fought off a series of attacks by the Confederates, virtually destroying the Army of Tennessee. Hood retreated with what men he had left, but was never effective afterward. In January 1865, he gave up his command of the Army of Tennessee, disgraced as a General.

After the war, Hood moved with his family to New Orleans, where he died, along with his wife, in the 1879 yellow fever epidemic.