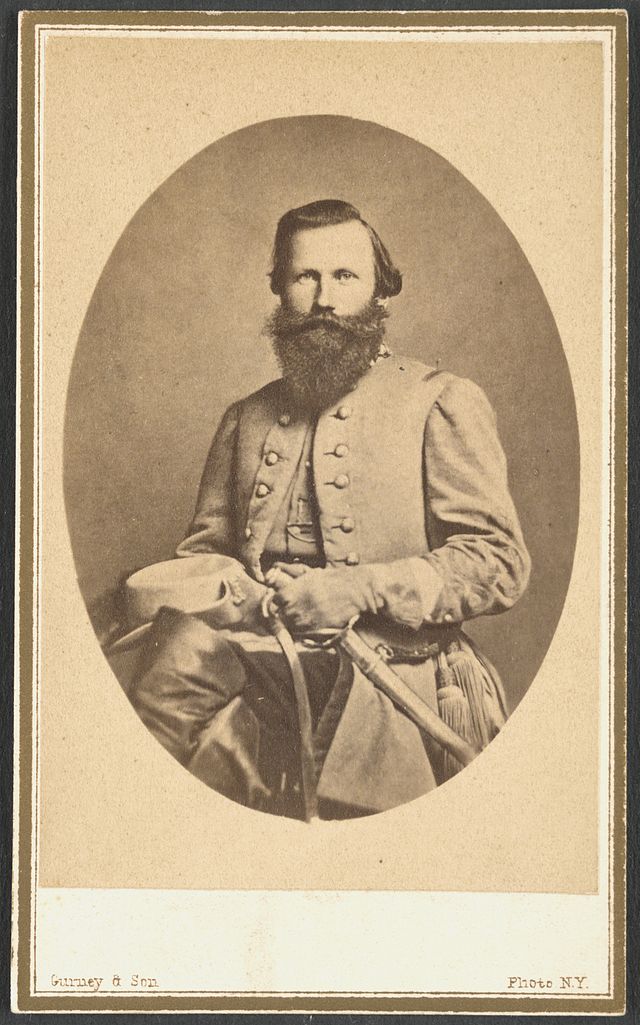 One of Lee's most trusted Generals. Stuart became famous for his "rides around McClellan". His absence on a similar expedition deprived Lee of critical information prior to Gettysburg. JEB Stuart had already seen plenty of action before the Civil War. Graduating low in his class at West Point (1854) he went into the cavalry and saw action against both Indians and white on the frontier in Bleeding Kansas. He was in the 1st Cavalry and was the courier who took orders for Robert E. Lee to proceed to Harper's Ferry and capture John Brown. Stuart talked Lee into accepting him as an aide-de-camp and went along. Lee sent Stuart to read the ultimatum to Brown, and then Stuart led the storming party of Marines that apprehended Brown.

Just days after Fort Sumter Stuart was promoted to Captain, but there wasn't anything that would have held the Virginian in the Union; within two weeks he was in Virginia service as a lieutenant colonel of infantry (May 6, 1861). Two weeks later he transferred to the cavalry (down to lieutenant), but in mid-July he was already Colonel of the 1st Virginia Cavalry, and in September he was a brigadier general.

His first service was in the Shenandoah Valley, but he was at First Manassas where he nipped at the Union right flank, and then tried to organize a pursuit. After that he had an unusual role. Nobody had foreseen entire brigades of cavalry, so Stuart kept command of his regiment but was also responsible for the whole army's outposts. By late October 1861 he had a cavalry brigade. He saw action in most of the battles in the eastern theater. Just before the Seven Days Battles he led his brigade in a raid behind the Union lines. He couldn't do much physical damage ' there were too many Union troops in the area, and he had to keep moving lest a large body crush his small command ' but he had wider effects. Of course it boosted Confederate morale (and depressed the Union) but it gave McClellan just one more thing to worry about. Just after the Seven Days Battles Stuart was promoted to Major General and given command of a whole division of cavalry.

He fought in the Second Manassas campaign (losing his cloak and plumed hat), but later on over-ran John Pope's headquarters and captured Pope's full dress uniform. Stuart also grabbed important orders that told Lee what Pope intended to do, something more practical than a braided uniform. After Antietam Stuart went on another raid around the Army of the Potomac, again not causing much damage but bolstering Confederate morale. (Stuart didn't destroy the one bridge that could have choked the Union blockade. Most hard-coal shipments to the blockaders went across one bridge, and had he realized it he could have blown it up. As it was, he saw no point in tarrying to demolish a stone bridge when he could burn so many more wooden ones.)

His cavalry didn't play much role at Fredericksburg, only covering a flank, but the next spring at Chancellorsville they were vital. Hooker had detached almost all the Union cavalry (it turned out to be a wild-goose chase) and Stuart found the open Union flank. Jackson's Corps smashed into the XI Corps, giving them the nickname of Flying Dutchmen" but when Jackson was mortally wounded Stuart stepped up. It was his largest command to date and a difficult time.