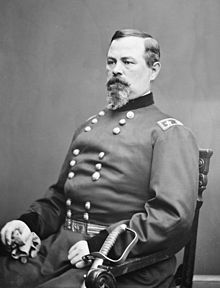 "Led the Union troops at the first battle of Bull Run, the first major battle and Union loss of the war. Later his command of the III Corps through several battles led to him being relieved. He was eventually exonerated by a court of inquiry." Irwin McDowell was a pretty good officer, but not a good general.

He spent much of his early life abroad, in France, before attending West Point (class of 1838) and doing well enough to be posted into the artillery. Even after graduating he didn't get away from the Hudson, spending a four year term teaching tactics at the Academy. He served in the Mexican War on John Wool's staff, earning a brevet for gallant service at the battle of Buena Vista. After that he commanded a desk, working in the Adjutant General's department.

During his time in Washington he won the friendship of Salmon Chase ' who as Secretary of the Treasury helped McDowell to leap to Brigadier General and command of the troops in Washington. He had an opportunity, but it was a double-edged sword. His troops weren't very good, while the public expected a miracle. He made some sensible moves to organize his men, then took the field before enlistments expired. The lumbering Union army pushed the Confederates behind the Bull Run creek, but the first attempt to cross fell apart. Three days later he tried a more ambitious plan. His subordinates didn't do all they might, but he wasn't very effective as an Army commander, leading from the front rather than making sure that everybody did their job.

His army dissolved, first into an armed mob, then as panic spread they threw away their weapons in the rush to get into Washington. Four days later he was replaced by George McClellan, and dropped to command of a division. Even moderately experienced, moderately competent commanders were at a premium for the North in early 1862, and he soon rose to Corps command in the Army of the Potomac. When McClellan took the Army of the Potomac on the Peninsular Campaign he left McDowell behind. The first priority of I Corps was to defend Washington, but secondly he was to push overland, supporting McClellan, increasing the pressure on Richmond, and opening alternate supply routes. Stonewall Jackson's victories in the Shenandoah stopped any advance before it could begin. McDowell's men had to stay around Washington, because nobody was sure what Jackson might do next.

In the event Jackson joined Lee for the Seven Days Battles. Meanwhile John Pope, victor at Island Number 10, had come east and been awarded command of all forces still in northern Virginia. McDowell had a new army commander, a man who dragged the new army back to Bull Run. McDowell was snake-bit on that patch of ground, and ended up in front of a Court of Inquiry. He was sacked for his performance at Second Bull Run, and he'd actually requested the Court to clear his name. It eventually decided for him, although with an unfortunate political taint to the verdict.

Whatever his political friends could do for him, they couldn't improve his command skills, and the Union high command knew better than to use him in battle. He was put in charge of the Department of the Pacific in July 1864, where he could do no harm. He retired in 1882.