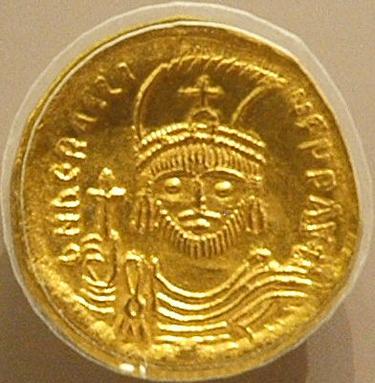 Emperor Heraclius ruled the Byzantine Empire from 610 to 641 AD. With the Byzantine Empire threaten on all fronts by different enemies (Avars, Slavs, and Persians) and while ruled by the corrupt emperorPhocas, the leading citizens of Constantinople urged the Exarch of Carthage, General Heraclius to come and deliver them from catastrophe. The general and his brother sent their respective sons with a well-equipped force and in the year 610 the general's son, also named Heraclius, triumphantly entered Constantinople with his bride, Eudocia. Phocas was executed and Heraclius crowned emperor. The fortunes of the Empire actually worsen within Heraclius' first five years on the throne. The Persians seized Damascus; Jerusalem (where the Church of the Holy Sepulchre was destroyed and most Christian artifacts, including the True Cross taken to the Persian capital, Ctesiphon); and Egypt, the main supplier of corn for Byzantium. Heraclius sat to work by first strengthening the defenses of the Empire. He divided the land into four Themes (military districts), each ruled by a military governor. By giving prospective soldiers land grants, he recruited a considerable number of native fighters. No longer was Byzantium to rely on foreign mercenaries. On the economic front finances were revived in the form of new taxes and fines as well as contributions from the Orthodox Church, even after the Church disapproved of his new marriage to his niece Martina after Eudocia passed away in 612. By the spring of 622 Heraclius was ready for the offensive. He led a powerful army (Heraclius risked his life by participating in many battles) and after six years of fighting defeated the Persian Empire. Looking old and sick, even though he was in his mid fifties, Heraclius entered Constantinople triumphantly on September 14, 628. However, all that was gained was soon lost. The armies of Islam, taking advantage of the political vacuum created by the weakened Persians, began their conquests around 633 which would take them to the vicinity of Paris and to Constantinople itself in less than a century. Heraclius did try to stop the onslaught when in 636 he raised an army of 80,000 men. This army met the Muslims by the river Yarmuk. A violent sandstorm struck the Byzantines head-on and gave the Muslims the advantage. The imperial army was destroyed. In 638 Heraclius, seriously ill (1), exhausted mentally and spiritually, faced an important imperial matter: who will be his successor? His wife Martina used all her power to ensure the crowning of her son, Heraclonas, heir over Eudocia's son Constantine. On June 4, 638 Heraclius performed the ceremony of succession choosing Heraclonas. With the succession settled, he spent the last years of his life trying to solve the religious problems besetting the empire, the debate centering on the nature of Christ and hotly argued between two camps: the monophysites and the monothelities, but to no avail. On Feb 11, 641 "one of the greatest of Byzantine emperors expired in misery and shame." (2) Notes: (1) Heraclius was suffering from a chronic renal disease (2) Norwich, John Julius- A Short History of Byzantium- page 97