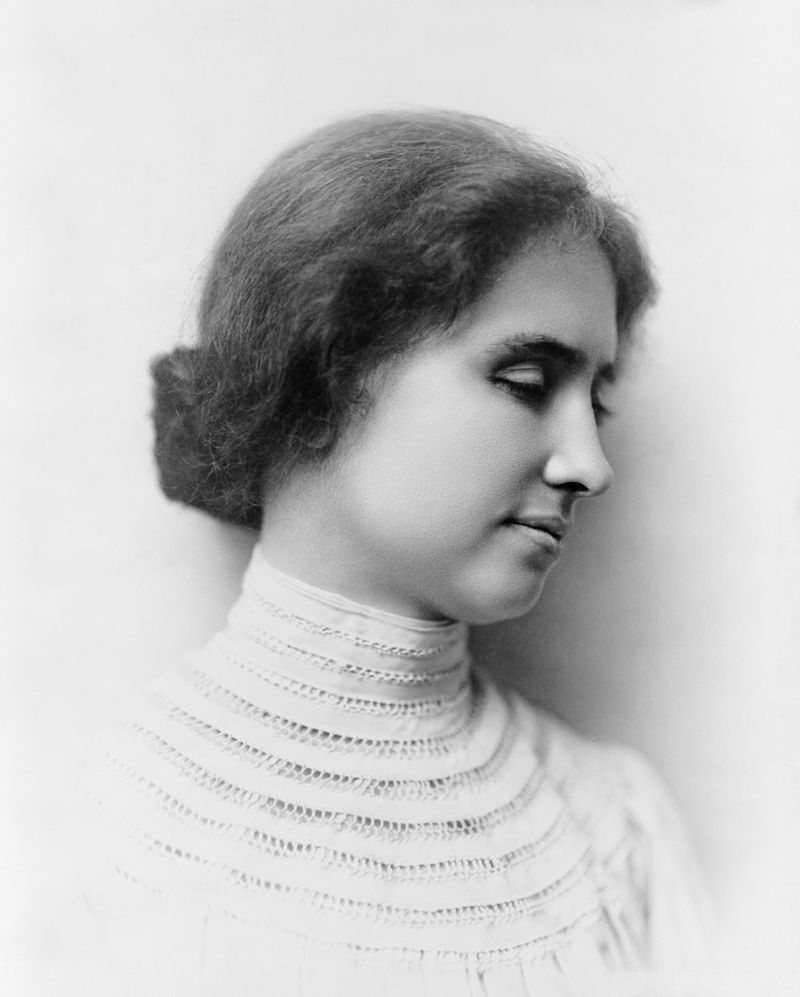 Helen Keller was born on June 27, 1880, to Arthur and Katherine Keller, in Tuscumbia, Alabama. She was born with all of her senses intact, but at the age of 19 months she became ill and lost her senses of sight, and hearing. From that moment until March of 1887, when her teacher and eventual companion of 49 years Anne Sullivan arrived, Helen communicated with very basic homemade signs, which few people around her understood.

Ms. Sullivan began teaching the blind-deaf Keller by spelling letters of the manual alphabet into her palm, and attempting to associate the letters with words and the words with objects. She began her teaching by using objects such as a doll and a mug, with little success. It was not until she had Helen hold one hand under running water, and spelled out w-a-t-e-r in the other, that Helen grasped the connection between words and objects. Upon her understanding, Helen demanded to know more words, and Anne obliged, teaching her vigorously for years. When she was ten years old, Helen expressed a desire to learn to speak. She sought out an instructor from the Horace Mann School for the Deaf and Hard of Hearing in Boston, and had eleven speech lessons there before being, once again, taught by Anne Sullivan.

Politically, Helen identified herself as a socialist. She participated in many movements associated with socialism: advocating for worker’s rights, women’s suffrage, etc. Additionally, she was a founding member of the American Civil Liberties Union, and the American Foundation for the Blind. It was with the AFB that Helen attained a national and global level of influence for the blind and vision impaired. She was directly responsible for the rehabilitation centers being established, and education being made available for the vision impaired across the United States. She visited soldiers who had returned injured from the second world war, and created an organization to aid deaf-blind persons in the US. In 1915 she served on the first board of directors for the Permanent Blind War Relief Fund, later renamed the American Braille Press, then the American Foundation for Overseas Blind. The organization is now known as Helen Keller International. Helen was named Counselor on International Relations by the AFOB in 1946, and began to tour the globe for the vision impaired.

From 1946 to 1957, Helen departed on tour seven times and visited a total of 5 continents, and over 30 countries. She became acquainted with world leaders, including every US president from Grover Cleveland to John F. Kennedy, was named ambassador of goodwill by Generals, and spread encouragement and inspiration throughout the world. The Universities of Harvard, Temple, Glasgow, Berlin, Delhi, and Witwatersrand, all granted her honorary doctoral degrees.

In 1960 Helen suffered a stroke, which signified the rapid ending of her public appearances, the last of which came at the 1961 Lions Clubs International Foundation meeting in Washington D.C., where she was given the Lions Humanitarian Award because of her lifetime of inspiration and service, and her aid in the implementation of Lions Clubs International Foundation for Aid to the Blind, and Sight Conservation programs.

Helen died at the age of 87, on June 1st, 1968. Her ashes are in St. Joseph’s Chapel of Washington Cathedral, next to those of Anne Sullivan, and her later companion, Polly Thomson