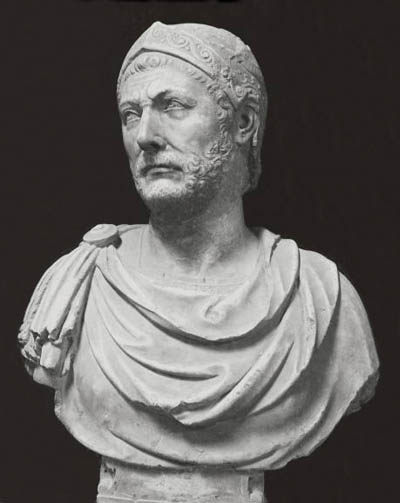 "Politician, statesman and military commander of ancient Carthage" Hannibal (from Punic, literally "Baal is merciful to me", 247 BC ' 182 BC) was a politician, statesman and military commander of ancient Carthage, best known for his achievements in the Second Punic War in marching an army from Spain over the Pyrenees and the Alps into northern Italy and defeating the Romans at the Battles of the river Trebia (218 BC), Lake Trasimene (217 BC) and Cannae (216 BC). After Cannae, the Romans refused to fight him in pitched battles, and gradually re-captured the cities that had gone over to Hannibal in southern Italy. An invasion of North Africa by the Romans under Scipio Africanus in 204 BC forced Hannibal to return to Carthage, where Scipio defeated him at Zama (202 BC). Following the end of the war, Hannibal led Carthage for several years, aiding its recovery from the devastation of the war, until the Romans forced him into exile in 195 BC. He went to live at the court of Antiochus III of the Seleucid Kingdom. In 189 BC the Romans, having defeated Antiochus in a war, demanded that he turn Hannibal over to them and the general fled again, this time to the court of King Prusias I of Bithynia. When the Romans demanded that Prusias surrender him in 182 BC, Hannibal committed suicide rather than submit. Hannibal is universally ranked as one of the greatest military commanders and tacticians in history, alongside Alexander the Great, Julius Caesar, Frederick the Great, Genghis Khan and Napoleon, and only a few others.