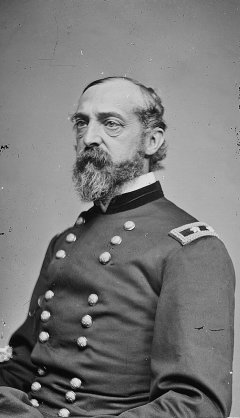 Replaced Hooker after the defeat at Chancellorsville and two days after assuming command led the Union Army to victory at the battle of Gettysburg. Born in Spain (his father was in business there, although having problems since America was at war with Spain's ally, Britain), Meade went to West Point in 1831. He graduated high enough to get into the artillery, but soon resigned to try his engineering skills in the civilian market. That didn't really work for him, and he rejoined the army in 1842, and went into the Topographical Engineers.

The outbreak of war found him surveying the Great Lakes, but almost immediately he was called back to Washington and given an infantry brigade of volunteers. He arrived too late for First Manassas, and spent the winter of 1861-62 training. He took part in the Peninsular Campaign, fighting in three of the Seven Days Battles, and was wounded at Glendale. It wasn't serious, and his brigade was soon moved back around to northern Virginia, which put him in the middle of the Second Battle of Manassas. During the Maryland campaign that followed he took command of the division, leading the Pennsylvania Reserves at South Mountain and a few days later at Antietam. When his Corps commander (Hooker) was wounded at Antietam, Meade stepped up. He was promoted to Major General (still of Volunteers) just before Fredericksburg.

His division did the best of any Union unit at Fredericksburg, temporarily breaking through Jackson's line. However, he wasn't supported, and Burnside's orders hadn't been very clear, giving enough time for Confederate counter-attacks. Still, his performance was enough to earn him command of V Corps. At Chancellorsville he did well in limiting circumstances: Hooker never used his whole army, and Meade's troops spent most of their time in reserve.

So far he had been competent and effective. When Lee invaded the North again in the summer of 1863, Hooker had to go. The finger of fate pointed at Meade, and on June 28, 1863 he assumed command of the Army of the Potomac. That was three days before Henry Heth's men blundered into John Buford's cavalry at Gettysburg, and it wasn't where Meade intended to fight. He preferred a line a bit to the east, but deferred to the opinion of Winfield Hancock, who was the man on the spot. Lee's attack on July 1 pushed the Union back, but on the 2nd and 3rd Meade juggled his reserves and held the line. Lee had to win, Meade only needed not to lose. He didn't, and Confederate chances for independence were never the same afterwards.

Meade was advanced from Major in the Regular Army to Brigadier General, and also voted the Thanks of Congress.

Yet his next operations were not so effective. A.P. Hill bungled the Bristoe Station campaign, but Meade didn't crush him. Then the Mine Run campaign turned into a non-event, the Army of the Potomac repelled by a thick skirmish line.