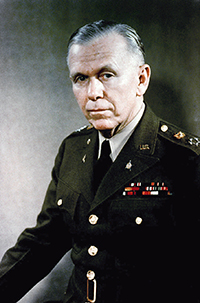 George Catlett Marshall, Jr. was born to Laura Emily and George Catlett Marshall, Sr. on December 31st, 1880, in Uniontown, Pennsylvania. The last of three children, Marshall’s parents expected much of him, but were routinely let down by his poor academics and roguish behavior.  As Marshall was coming of age, and after being denied entry to West Point, he made a resolution to focus his efforts upon all areas of life in which he was involved. He enrolled in the Virginia Military Institute in 1897, and graduated in the top ranks of his class in 1901.

Marshall was then deployed in 1902 to the Philippines to serve as an Infantry Second Lieutenant in the Philippine-American War for 18 months. In 1907 he enrolled in the Army Cavalry program at Fort Leavenworth, and the following year he was accepted into the Army Staff College. Again, he was deployed to the Philippines, and returned to the United States in 1916, the middle of the first World War, and was assigned to the staff of Major General J. Franklin Bell, commander of the Western Department of the Army. Spring of 1917 saw General Bell reassigned to command the Eastern Department, and as such, placed George Marshall in a key role as an overseer of the US Army’s 1st Division’s mobilization.

He was then sent to Europe and was attached to the staff of General John J. Pershing, a man who would quickly become his mentor. Marshall planned many key allied offensives in the First World War, most notably that of the Meuse-Argonne Offensive, which was vital in defeating the German Empire.

The inter-war years saw Marshall filling a multitude of different positions. He served as a personal aide to General Pershing from 1919-1924, and taught the concepts of mechanized warfare at many military institutions. Additionally, he wrote for the U.S. War Department, spent a three-year tour in China as commander of the 15th regiment, and was appointed as an instructor at the Army War College. Marshall was appointed assistant commandant of Fort Benning, Georgia, in 1927.

In 1936, Marshall was promoted to Brigadier General and placed in command of the Vancouver Barracks in Washington. 1938 saw him reassigned as Deputy Chief of Staff and moved to Washington D.C., where many thought he ended his career by disagreeing with President Roosevelt’s plan to provide aircraft to Britain on the eve of World War II. Instead, Roosevelt promoted him to Army Chief of Staff, thus also promoting him to General, on September 1, 1939. Coincidentally, this was also the day that Nazi Germany launched its invasion of Poland.

Marshall inherited an armed force of under 200,000 men, a force that he grew to over 8,000,000 by 1942. Marshall was also skilled in appointing leaders, putting such names as Patton, Eisenhower, Bradley, and others in executive positions. Direction of personnel development and training, as well as international war effort coordination, also fell within his jurisdiction. He was instrumental in the planning of Operation Overlord, (D-Day) which he initially scheduled for April 1st, 1943, but Winston Churchill superseded his plan in order to commit troops to the invasion of Italy. When the time for Overlord did draw near, Eisenhower was chosen to lead it instead of Marshall. President Roosevelt justified this decision by stating that General Marshall’s skills were required in Washington, and he would feel uncomfortable without him close at hand.

In 1944, Marshall was the first U.S. soldier to be promoted to General of the Army, a “Five-Star” rank, comparable to other nation’s Field Marshals. He was not entirely pleased with this idea, as he could now be correctly referred to as “Marshal Marshall”.

The war ended the following year, and Marshall left his military post. President Truman appointed him as the U.S. representative to China as a mediator of the Chinese Civil War. Marshall did not bring both sides to common ground, and communism took over the Nation in 1949. Even though he failed in the East, Truman made him Secretary of State in 1947. During his tenure in the position, he devised the European Recovery Program, which would become known as the Marshall Plan, an economic strategy built to reenergize European markets. Because of his work on aiding European recovery, he received the Nobel Peace Prize.

Marshall did not support the creation of the state of Israel, believing it to be a purely political move by Truman, and thinking that it would no doubt spark warfare in the region, which it did the day after Israel declared itself a state.

In 1950, Truman appointed Marshall as Secretary of Defense. George Marshall spent one year filling the role, and notably authorized attacks across the 38th parallel in Korea, and concurring with the relieving of General Douglas MacArthur. In September 1951, he officially retired from political life. However, Marshall did perform one last duty on behalf of his country in 1953 when he attended the coronation of Queen Elizabeth II as the chief of the U.S. delegation.

On October 16, 1959, George Catlett Marshall Jr., former General of the Army, Secretary of State, and Secretary of Defense, passed away at the Walter Reed Hospital in Washington D.C. He is interred in Arlington National Cemetery.