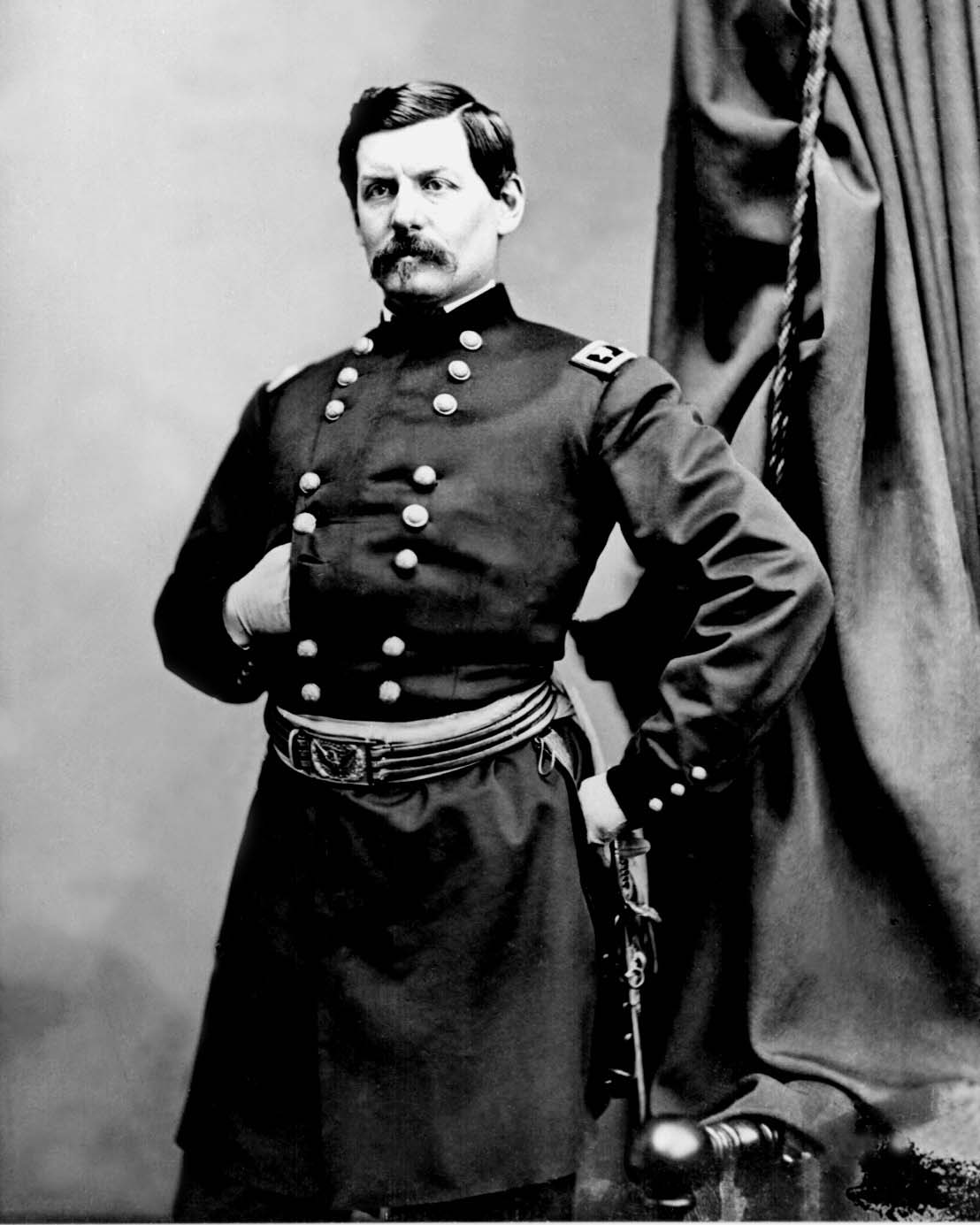 Lincoln made McClellan commander of the Army of the East (later the Army of the Potomac) and later general in chief of all Union Armies. Lincoln later removed him because of his failure to take the offensive with the Confederate army. George McClellan was the best general that didn't like to fight that this country has ever produced. He was an ambitious professional soldier (West Point 1846 after the University of Pennsylvania) who had done well in the army before the war. He'd graduated second in his class, which put him into the elite Engineers, then served in the Mexican War, earning two brevets under Winfield Scott's eye. When the fighting was over he worked on the coast defenses of the U.S., then taught for a spell at West Point. He left the engineers in 1855 to go to the cavalry, because there was more cavalry and he would be promoted sooner.

The Army sent him as an official observer to the Crimean War (1853-56), which was a formative event for the ex-engineer. He reported on many topics, but especially the siege operations around Sevastopol. He also managed a European tour, especially examining cavalry, which led him to redesign the U.S. Army saddle to be easier on the horse, if a little harder on the rider. He resigned in 1857, since he wasn't getting ahead fast enough. He used his engineering skills in civil life, working for the Illinois Central and, just before the war, the Ohio & Mississippi. He did well at it, being Chief Engineer (and a VP) for the Illinois Central, and division director for the O&M.

He re-entered military life with the Ohio Volunteers (Major General, April 1861) and within days was commanding Union forces in western Virginia (later West Virginia). In May 1861 he was brought back into the Regular Army, jumping from Captain to Major General. He secured the area for the Union, driving the ill-organized Confederates (who had little local support) out. His actions were widely reported in the press and he certainly didn't minimize his media profile, or mention the role of his subordinates.

When the Army of the Potomac was whipped at First Manassas he was the obvious candidate to replace McDowell. Quick promotion and public adulation went to McClellan's head: he publicly denied he wanted to be a military dictator (as if many people were clamoring for one) and he shamelessly exploited his popularity to undermine Winfield Scott and report directly to the President. In November 1861 he was named as General-in-Chief of the U.S. Army, answerable only to President Lincoln ' and not always to him, as Lincoln found at least once when McClellan declined to meet him.

McClellan spent the winter of 1861-62 training the army, something it desperately needed. But that seemed to be an end in itself: McClellan developed few operations plans and divulged even fewer to his civilian masters. When he moved it was seldom rapidly, and Joe Johnston was able to withdraw from Manassas Junction (although at the cost of tons of supplies) in March 1862 without any contact.

The spring campaign then took on a new direction. McClellan used the Union advantage at sea to swing his massive army around, down the Chesapeake Bay and up the James River. He could use Fort Monroe as a base, and draw supplies from the sea, while getting closer to Richmond. He also moved around all the river lines that offered the Confederates defensive lines against a Union advance from northern Virginia. So the strategy was good, but McClellan wasn't the man to implement the plan.

He paused at the first obstacle, small Confederate forces at Yorktown, and proceeded to arrange a siege. (The Confederate positions included some of those used by the British in 1781.) The Confederates slipped away before he could crush them. Advancing on the north side of the James, he did the same thing at Williamsburg, pausing in the face of strong defenses even though they were lightly manned. His experience of the Crimean War was bearing fruit; there, the slow-moving besiegers won. The Confederates had read their history too, and withdrew before McClellan's massive siege batteries pounded them to bits. But they were getting closer to Richmond, and would have to fight somewhere. Joe Johnston elected to counter-attack at Seven Pines, and earned himself another wound (at least his sixth) but not a victory. McClellan could have badly damaged the Army of Northern Virginia, but was slow to move and really his subordinates beat off the attacks.

McClellan now moved even slower. He reorganized his men, kept their supply lines open, had powerful artillery batteries moved up to prepare the siege of Richmond, and ' always ' wailed for reinforcements. To hear him tell it, every able-bodied man in the South was in uniform waiting to pounce on the Army of the Potomac and he was doing the Union a favor by not risking anything. In reality, Robert E. Lee had a little over half McClellan's strength.

But Lee concentrated his men, and used them. He attacked McClellan's open northern flank and drove it back. The Union troops weren't so much beaten as withdrawn, and later in the war they would have held their ground ' and might have under another general. In the Seven Days Battles Lee generally paid a higher price, but at each step the Union gave ground until McClellan was convinced he was beaten and began evacuating.

He'd been relieved of his duties as General-in-Chief in March, so he could concentrate on the Peninsular Campaign (and in hopes he would move faster). Now many of the troops were moved back to Washington and put under John Pope for what proved to be the equally abortive Second Manassas campaign. With a challenger defeated, McClellan returned as commander of the Army of the Potomac and immediately had to deal with Lee's invasion of Maryland. For a change he moved rapidly, although there was still room for improvement. He was handed a copy of Lee's operations plan (lost by a courier) and could have pounced on Lee's army when it was stretched out on the march. But he couldn't force his way through at South Mountain, and ended up attacking Lee's concentrated army at Antietam. Little Mac still had more men than Lee, but he bungled the attack ' making a series of small attacks, allowing Lee to stop each individually ' and only drew the battle.

Lee's army was exhausted and depleted, and he pulled back to Virginia. Lincoln seized the opportunity to declare a victory and issued the Emancipation Proclamation (September 22, 1862). Lincoln was losing patience with McClellan, but by calling Antietam a victory he lost the opportunity to fire his general. Lincoln's opening came a few months later when JEB Stuart's cavalry rode all around the rear of the Army of the Potomac unscathed. McClellan had requested all sorts of improvements to his cavalry ' and Lincoln had provided them. That was enough to show that it was McClellan's fault, and on November 9 he was removed. He expected to be given another job, and waited, and waited, and waited. It became clear Lincoln wasn't going to have anything to do with him, so he entered politics as the Democratic presidential nominee in 1864.

He had to attack Lincoln's war record, which by late 1864 was looking better. He also was in a bind: the Democratic platform was anti-war, but McClellan wanted to fight to victory. He was demolished in November, winning only three states (New Jersey, Delaware, Kentucky). He resigned from the Army the same day.

After the war he delved into politics, becoming Governor of New Jersey in the 1870s and 80s, and writing his memoirs.