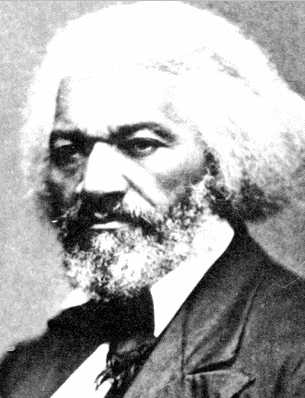 Former slave and famous anti-slavery speaker and writer. He helped form two regiments of African American soldiers during the war. Born a slave with the name Frederick Augustus Washington Bailey in 1818 in Maryland, Frederick Douglass escaped his bondage and made his way north in 1838. Once free, Douglass labored endlessly for the abolition of slavery. He worked with prominent abolitionists such as William Lloyd Garrison, with whom he later split over Garrison's belief that abolition should come only through nonviolent means. During the Civil War, Douglass sought to have President Lincoln make the war a war on slavery. He succeeded. He also wanted the Federal Government to enlist free blacks to fight, which eventually occurred, with two of Douglass' sons fighting with the 54th Massachusetts Infantry Regiment commanded by Colonel Robert Gould Shaw. A loyal Grant supporter after the war, Douglass was appointed to several government positions by the President. From 1889-1891, Douglass served as U. S. Minister to Haiti. He wrote several accounts of his life as a slave and freeman.