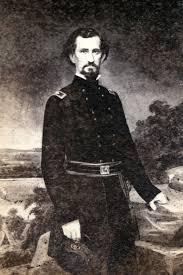 "Prewar, served in U.S. House of Representatives. Gained notoriety as a newspaperman in Nashville. Rose to the rank of brigadier general in the Confederate Army. Killed early in the war. " Zollicoffer was from Maury, Tennessee. He was killed at the Battle of Mill Springs (also known as Logan's Crossroads or Fishing Creek), January 18, 1862, and is buried in Nashville's Old City Cemetary. Prior to the outbreak of hostilities, Zollicoffer was a newspaper editor in Nashville Tennessee. He was a member of the Whig party, and wrote editorials in their support.

Though avowedly opposed to secession, Zollicoffer chose to support the Confederacy. His military experience to that point was brief duty against the Seminole tribe in Florida. He had also served as Adjutant General of Tennessee.

After the war began, Governor Isham Harris (Tennessee) offered command of State troops to Zollicoffer. He chose, instead, to accept a brigadier's commission in the Confederate Army.

Brigadier General Zollicoffer was killed while performing a night reconnaissance of friendly and enemy troop positions at the Battle of Mill Springs. He mistakenly rode into a party of Union troops, led by Colonel Speed S. Fry. Zollicoffer attempted to escape through the ruse of pretending he was a Federal horseman, but was soon found out and killed by revolver and musket fire.  He was the first Confederate general to die in the Western Theater.