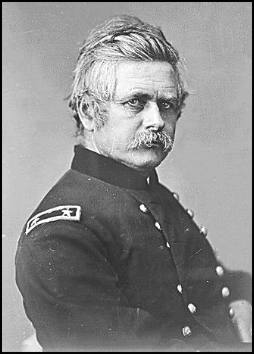 "Union infantry commander. Fought the entire duration of the War. He served the United States Army from California to Florida, from 1839 to 1881." Union Major General Edward O.C. Ord was a West Point graduate and a 1839 classmate of General Henry Halleck. Ord served as a 2nd lieutenant against the Seminoles, then in California during the Mexican War. This was followed by Indian duty in the Pacific Northwest.

In 1859, Ord was reassigned to duty at Fort Monroe, and took part in the expedition against John Brown's raid on Harper's Ferry.

September 1861 found Ord back in California. He received a brigadier's commission and ordered east, where he commanded a brigade defending Washington. His first combat of the war was against General Jeb Stuart at Dranesville.

In May of 1862, he was promoted to major general and sent west.

He was present at Iuka in September 1862, with little significant result. His command was west of the town, and saw little fighting. Due to an error by General William Rosecrans, the Confederate forces under General Sterling Price escaped. Ord was severely wounded a few days later, while damaging Confederate forces retreating from an unsuccessful attack on Corinth.

Ord commanded the VII Corps under General Grant at the siege of Vicksburg in 1863.

Ord commanded the XVIII Corps at the siege of Richmond. He sustained serious wounds at the attack on Fort Harrison in September of 1864. The severity of his wounds took him out of action for the remainder of the year.

In January of 1865, he assumed command of the Army of the James, as well as the Department of North Carolina.

After the War, Ord had several more assignments, and retired as a major general in 1881.

While travelling by ship in Central America, he contracted yellow fever. He died in Havana on July 22, 1883. He is buried at Arlington, Virginia.