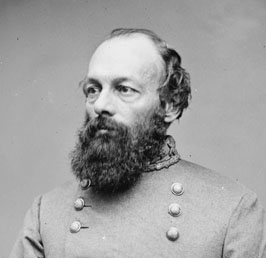 Took Confederate forces into Kentucky. Kirby Smith came from the sparsely settled state of Florida, and that earned him his West Point (class of 1845) nickname. He graduated middle of his class and went into the infantry, promptly winning two brevets in the Mexican War. When the Army expanded the number of cavalry units to deal with the expanding frontier he transferred, because promotion prospects were better. He also taught for a spell at West Point and fought the Indians in Texas (they fought back; he was wounded).

He made it to Major (2nd Cavalry) before secession, and wasn't originally sure about secession: he declined to hand his men over to Texas State troops. Soon enough he joined the Confederate service, rising through Lieutenant Colonel through Brigadier General to Major General all in 1861.

He served first with Joe Johnston in the Shenandoah, as chief of staff trying to coordinate raising, organizing, and equipping men, then bringing them where strategy dictated. By June he had the perhaps easier task of simply commanding a brigade, which he led at First Manassas. He was seriously wounded, missing over two months, but he returned to command a division over the winter of 1861-62.

Before the spring campaigning season he was transferred to eastern Tennessee, commanding the Department and the troops there. He worked with Braxton Bragg's invasion of Kentucky, whipping a Union force at Richmond and occupying Lexington in September 1862. He was promoted to Lieutenant General and given a Corps in Bragg's Army of Tennessee, but for only a short time.

In January 1863 he took command of the whole Trans-Mississippi west, Arkansas, western Louisiana, and Texas. His domain was large but sparsely settled, and had little industry. Once Grant captured Vicksburg he was effectively severed from the rest of the Confederacy and the area became known as Kirby Smithdom.