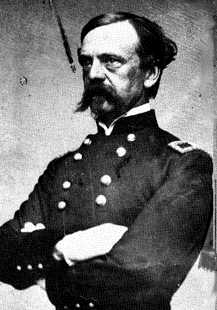 "Controversial Union General, as much for his exploits off the field of war as on it." So much of Dan Sickles' life was unrelated to the Civil War, it's hard to know what to leave out. Born in New York, he went to New York University, studied law and was also apprenticed to a printer. He joined the Bar, a more lucrative profession, serving as a Corporation Attorney and also was elected to the New York Assembly. President Pierce sent him to the London Legation (the U.S. didn't have formal embassies then) from 1853 to 1855, then he served in the New York Senate before moving to the U.S. Congress (as a Democrat) from 1857 to 1861.

Sickles was in Congress when he shot a man, Francis Scott Key's son, across the street from the White House. Key was having an affair with Mrs. Sickles and the defense attorney (Edwin Stanton) tried a novel tactic: temporary insanity. The jury bought it, and Sickles was off the hook. Public opinion had been on his side as the outraged husband, but when he took his wife back people shook their heads.

The Civil War got him off the hook. He raised a brigade's worth of volunteers when authorized to raise a regiment (he became Colonel of the 70th New York). With numbers on his side, and contacts in Congress he was quickly a Brigadier General. He spent some time over the winter of 1861-62 training them, perhaps as much time lobbying Congress. He took the field in 1862, fighting at Seven Pines and through the Seven Days. They didn't fight again until Fredericksburg when he commanded a division.

His reputation bottomed during the winter of 1862-63. Joe Hooker had a bad enough reputation, but Sickles was more of a drinker, more of a womanizer. Commanding the III Corps at Chancellorsville, Hooker mis-managed the battle and III Corps marched, but hardly fought. When Hooker was replaced with Meade it was only days before Gettysburg, and hardly time to make more changes.

Gettysburg was Sickles' last battle, and his most controversial. Ordered to occupy a stretch of the Cemetery Ridge on July 2, he didn't like the ground and moved forward, into the Peach Orchard. His supporters claim his forward position absorbed the impetus of Longstreet's advance, saving the Union line. Detractors say he wrecked his Corps and exposed II Corps' flank as well and would have been better off on the ridge. Sickles was at least brave on the field, as well as losing a leg to a shellburst. (He donated the amputated fragments to a medical museum.)

He was never employed again in the field, largely because he feuded with Meade. Instead the army sent him to various administrative posts; for instance in 1865 he was sent on a mission to South America. After the war he was sent as U.S. Minister (we didn't appoint Ambassadors) to Spain. He is reputed to have fathered children with the Queen of Spain, and his activities (to use no stronger word) caused his recall. He got back into Congress from 1893-95. In 1897, with memories cooling about his activities, he was awarded the Medal of Honor for Gettysburg.