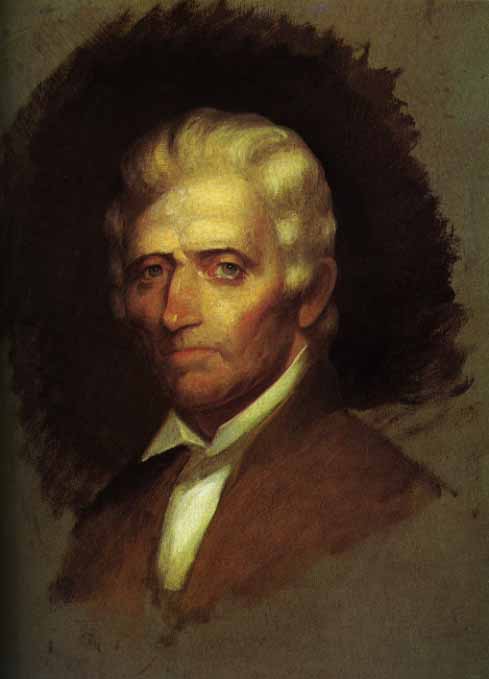 American frontiersman and hero who helped blaze a trail through Cumberland Gap in the Appalachian Mountains. The Boone family were hard-working Quaker farmers. Daniel grew up learning to hunt, trap and survive on the land - skills that would make him a consummate survivor on the American frontier. Like most pioneer children, he did not attend school but was taught to read and write by a family member, in his case an aunt. When Daniel was about sixteen, the Boones sold their farm in Pennsylvania and resettled in the Yadkin River Valley of North Carolina a journey that took the family over a year. In 1755, during the French and Indian War, Boone served in a military expedition under British General Edward Braddock. Boone drove a supply wagon in Braddock's campaign to seize Fort Duquesne (near present day Pittsburgh). Boone helped guide the redcoats through the Pennsylvania backwoods and was present when the French and their Native American allies wiped out 70% of Braddock's force in an ambush. Braddock himself was killed but Boone escaped.

He returned home and the following year married Rebecca Bryan, the daughter of a family friend. The couple had ten children. The first ten years of the marriage Boone spent hunting and farming to provide for his growing family but Boone became restless. During the Braddock expedition a friend had grabbed his imagination with stories of Kain Tuck, the mystical land westward across the Appalachian Mountains. It was said it was a hunter's paradise where buffalo roamed freely. Turkeys and deer filled the woods. He had to go. Next time: The trailblazer.

Contrary to popular myth, Daniel Boone was not the first American pioneer to explore Kentucky. Boone, however, did establish a pathway through the mountains that made possible increased settlement in the west. The Cumberland Gap is a natural pass in the Appalachian Mountains on the border of Virginia, Kentucky and Tennessee. The cut was made by an ancient stream six hundred feet into the highlands at an elevation of 1600 feet. Dr. Thomas Walker, a Virginia agent for the British Loyal Land Company, discovered the pass in 1750. Dr. Walker simply followed a trail (called the Great Warrior's Path) that the Native Americans had used for centuries. He named it for the son of King George III - the Duke of Cumberland. In 1775, Daniel Boone, who knew the Gap in both directions, was hired by a Carolina trading company to clear and mark the pathway. Using axes, Boone and a party of thirty woodsmen cut a rough trail about as wide as a footpath. This "Wilderness Road" blazed by Boone was three hundred miles long, extending from feeders in eastern Virginia, North Carolina, and Pennsylvania, through the Cumberland Gap and into the heart of Kentucky. The group established a fort at the end of the trail - they named it Boonesborough. In 1792, after Kentucky became a state, the Wilderness Road was widened and reinforced to accommodate wagons. By 1800, more than 200,000 pioneers had used the road to get through the Appalachians. Today the Wilderness Road is part of U.S.Route 25 or the Dixie Highway, one of the most historic highways in America.