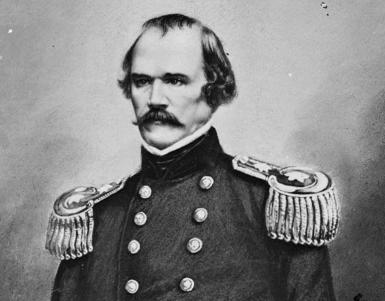 "Because of his military successes prior to the Civil War, Davis gave Johnston charge of operations of Tennesse and Kentucky. He was killed at the Battle of Shiloh." Everybody thought Albert Johnston the best soldier in the country; that was before the war. He'd had a gaudy career in the army after West Point (1826). After some peacetime soldiering he quit to care for his dying wife, then moved to Texas to start over. When Texas decided on independence he enlisted as a soldier and in a year he was commanding the whole Texan (or Texian as they were often called then) forces. The Texans made him their Secretary of War during their brief independence, and after annexation he led the 1st Texas Rifles in the Mexican War.

After the Mexican War the Regular Army took him back as a major, and soon (as soon as the leisurely promotion of the peacetime Army allowed) he was Colonel of the 2nd Cavalry. He was a key part of the 1857 campaign against the Mormons, being promoted and shortly sent to California. In 1861 he resigned to follow his state (Kentucky) but loyalty to the U.S. lingered: he did not leave his post until there was someone to look after American interests.

In Richmond, Jefferson Davis immediately made him the second most senior officer in the Confederate forces. His immediate appointment was to secure and organize the western theater. He laid out a line through middle Kentucky, dipping down to the Tennessee River in western Tennessee. The eastern end was jarred loose in January 1862 by a Union attack at Mill Springs; in February the western end cracked when Forts Henry and Donelson surrendered. The center could not hold, especially with the Foote's Union gunboats able to penetrate up the rivers into central Tennessee. Johnston pulled back into northern Mississippi and finally concentrated his forces ' previously they had been strung out with no concentration nor reserve.

He took the initiative against the Union forces that had stopped to reorganize and resupply. Setting off from Corinth, Mississippi, he marched his three Corps towards Pittsburg Landing. The Union forces hadn't posted adequate pickets, and his attack was a surprise. Johnston led from the front, boring his way to the river and Grant's headquarters. He was wounded in the leg, something he didn't consider serious enough to stop him. It was; he bled to death.