Wilmer McLean -- The Beginning and the End 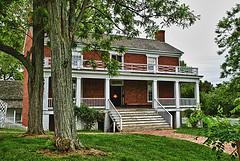 Wilmer McLean stood on the front porch of his two-story brick house awaiting the arrival of General Robert E Lee. In the early afternoon on that day, General Lee, accompanied by Colonel Charles Marshall, arrived on horseback. Wil extended his greetings to the two Confederate officers and invited them into his parlor. And there, on April 9, 1865, they awaited the arrival of the other guests.

General Grant and several of the Union officers entered the parlor where General Lee was waiting. For the next hour and a half, General Lee and General Grant discussed and came to agreement on the terms of surrender of the Confederate Army of Northern Virginia, which, for all practical purposes, ended the long, bloody war.

Wil, a retired Major in the Virginia militia, was too old to be conscripted when that Civil War began. For the majority of the war, he was a merchant primarily dealing in the buying and selling of sugar, but, at the outset of the war in 1861, he was a farmer living in northern Virginia with his family.

The war struck close to home early on and McLean moved his family from northern to central Virginia out of concern for their safety, settling eventually in the home at Appomattox Court House. The First Battle of Manassas (Bull Run) took place on Wilmer McLean’s farm on July 21, 1861 and inspired the move. So, in a most unusual twist of fate, the Civil War started in McLean’s backyard in 1861 and ended in his parlor in 1865.