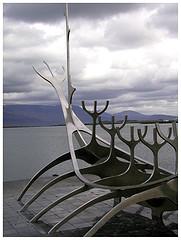 Out of the fragmented world of Europe in the Middle Ages, after the decline of the Western Roman Empire, several societies began to make their presence felt. One of those societies was that of the Norsemen, or more commonly known, the Vikings.

The Vikings' primary mode of transportation was a boat pulled by oarsmen. In the first millennium, these boats were small, but by the 10th century, the longboat had come into use and nothing instilled fear in the hearts of Medieval Europeans more than the sight of an approaching Viking longboat full of men ready to pillage and plunder.

The longboat had a shallow draft and could be easily sailed up shallow rivers, and ranged in size from a few dozen feet to over one hundred and fifty feet. The Vikings used the longboats to conduct raids against isolated towns and monasteries in France, Germany, and England, as well as Russia and even the Mediterranean Sea.

The importance of the longboat to the Vikings cannot be underestimated. It was a symbol of both wealth and power and was closely associated with the owner's personality. In fact, the boats were so important to the Norse that many warriors were actually buried in them to be used in the afterlife. Many fine examples of longboats used for burial have been found over the past several decades.

By the Nineteenth Century the longboat was obsolete, replaced by larger, faster ships capable of carrying larger payloads farther with fewer crew. However, the longboat continued to sail the icy waters of Northern Europe, but without causing the fear the longboat brought in the previous centuries as it sailed along the coast or up a river looking for a target of opportunity.

The Viking longboat had a tremendous influence on Europe economically and socially, even contributing to a large degree to the establishment of Feudalism.